Francolini discovered her love for computer science and marine biology in highschool, but was then introduced to the combination of those two topics by one of her highschool teachers. The rest is history. Francolini furthered her education in science and got her undergraduate and accelerated master’s degree at Carnegie Mellon University for Computational Biology. When she came right out of college, she worked as an oyster farmer for a few years before working at the Woods Hole Oceanographic Institute (WHOI). During the last two years spent there. Francolini spent her time in the environmental toxicology lab, collecting Environmental DNA (eDNA) from deep parts of the ocean, and the molecular ecology lab taking part in a larger project known as the Ocean Twilight Zone Project.

The Ocean Twilight Zone Project focuses on gathering research from a part of the ocean called the mesopelagic zone. It’s often referred to as the twilight zone, and is home to the greatest amount of fish in the sea. Often the fish we will find on our dinner plates like tuna and swordfish are coming from there. The twilight zone also takes part in removing some of the carbon in the atmosphere, which regulates our climate. In today’s world, we need to be careful in protecting it because it benefits not only the fish, but us too. This research will help advance ocean science; it will also give government officials insight on this zone, so hopefully they will try their best to protect it.

Francolini is currently getting her Marine Science PhD, while also taking part in the Maine-eDNA project as a Graduate Research Assistant. She’s specifically working on the Gulf of Maine’s kelp forests, and “how we anticipate climate change to alter the landscape and biodiversity of these vital ecosystems” (500 queer scientists). This project combines fieldwork, collecting samples, as well as computational and molecular work. This project showcases how versatile Francolini is as a biologist. 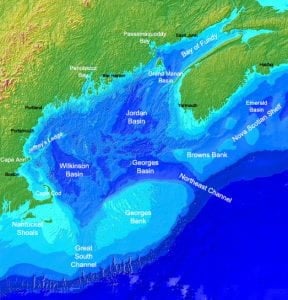 The Gulf of Maine located on a map

Franciolini loves that being a scientist means that you can share your passion with others, which even leads some to discover a love and interest in STEM and the environment around us. She is proud to be a part of the openly LGBTQ+ minority in STEM, as representation in this field encourages more young scientists that will be coming from our generation to outwardly be who they are without fear of not being accepted and/or respected.