Sharon Strauss is an evolutionary ecologist at the University of California, Davis (UC Davis) where she has been conducting research on the evolution of plants and the ways in which they interact with other species. As a woman in a STEM environment, Strauss has faced opposition due to her gender. It took her 5 years longer than the regular time trajectory to obtain a job in her field, subtle obstacles such as invitations to work with groups, and also simply not being taken seriously or personally asked to contribute to group conversations. Although she has faced challenges, Strauss has done phenomenal research on the ecology and evolution of plants and her efforts, both her research and her job as a professor, have been rewarded.

One of her largest and most well known projects was called Nowhere to run, nowhere to hide. During this project, she and her team were studying how wildlife adapted to a barren environment. During this expedition, Strauss and her team explored the possible connection between attack rates and visibility. They followed 160 seedlings of a few different species from the genus Streptanthus and observed how they grew and what their current condition was depending on the amount of bare ground and leaf coloration. Additionally, they formed small clay models of caterpillars to act as an undefended population of prey in order to measure attack rates on visible animal species. They measured this by checking the area around the caterpillars to see if there were beak or tooth marks of a predator attempting to eat it. Strauss was able to conclude that attacks on both animals and plants were connected to how apparent or visible they were in their environment. For this reason, certain plants and animals had adapted by changing their color in order to blend into their barren environment. 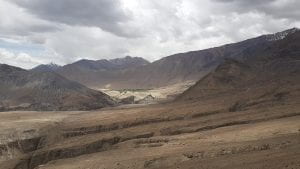 An example of a barren landscape. Due to the lack of vibrant colors and the lack of vegetation, organisms had to adapt to blend in with the dull environment.

Since this project mainly involved studying adaption and evolution, it is not very similar to anything we have learned in class yet. However, there is a connection between evolution and genes, which we are currently learning about. Every organism that sexually reproduces passes genes down to their offspring via the sperm and the egg. The physical features of the offspring are determined by the genes they are composed of. Typically, these genes are passed down by the parents to the offspring; however, it is also possible for an error in DNA replication to occur or exposure to chemical or radiation damage that can cause a mutation. This connects to evolution since there will always be variety within a population. A certain trait could prove to be more successful in survival than another so gradually, over many generations, that trait will be passed down since the members of the population that have that gene have a higher chance at surviving and reproducing as proposed in Darwin’s Theory of Evolution.

I admire the hard work and the effort that Sharon Strauss has put into her career and passion to get where she is now and to have achieved what she has. Despite the barriers that were placed in front of her, she continued on since biology was her passion. I also have a passion for biology, specifically zoology, and as a girl, I may face similar obstacles. Even if I change my mind or find a new passion, I hope to carry the same spirit that Sharon Strauss did to push through any barriers that I may face.