Alan Mathison Turing (1912-1964) was an English mathematician and logician. His works helped develop the fields of computer science and artificial intelligence. Growing up, Turing received top-notch education from private schools because his father was a civil servant for British India. They weren’t necessarily rich, but they were considered to be upper-middle class. Additionally, the headmaster of Sherborne School told claimed that “If he is to be solely a Scientific Specialist, he is wasting his time at a Public School” in response to Turing’s fascination with science at a young age.

This interest in science came from the early stages of his childhood. As Turing’s father worked in India, Turing and his older brother lived in foster homes that did not encourage creativity and research. Due to this bland lifestyle, Turing considered science to be a special experience that he eventually turned into his passion.

Turing’s academic accomplishments allowed him to study at the University of Cambridge, King’s College, and Princeton University. 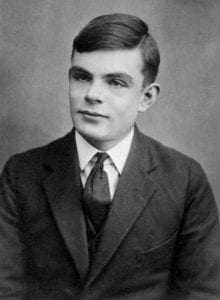 Turing solved this problem by creating something he called a computation machine, which is now known today as the Turing machine. A Turing machine can be represented by circles, arrows, and symbols. Each circle is a state of the machine. The symbols and arrows indicate how to transition between states. Additionally, there is something called a tape, which is an array of symbols that extends infinitely in both directions. The formal definition of a Turing machine is an ordered septuple that is made of (Q, Sigma, Gamma, q_0, h_a, h_r, and delta). Q is the set of all states, Sigma is the alphabet, Gamma is the alphabet of the tape, q_0 is the start state, h_a is the accept state(s), h_r is the reject state, and delta is the transition function. In order to understand the explanation easier, think of a TM as a theoretical computer.

This is an example of the main body of a TM The states are labeled with letters and the transitions are the arrows that are labeled with symbols. State E is the accept state, indicated by the double circle. The reject state is not shown in this TM (it’s usually excluded from the TM for the sake of simplicity, but it is implied to be there).

This is an example of a TM tape, which contains the inputs and outputs of the TM. The tape head (q_1) indicates the current symbol.

During WWII, the Germans were sending encoded messages to each other. The Allied forces struggled greatly due to U-boats and their orchestrated attacks. In an attempt to aid the Allies in the war, Turing and a team created a machine that could decipher their secret messages. They created a way to crack codes at a rate of two per minute, saving millions of lives and speeding up the war by two to four years in the process. There would’ve been an estimated 14 to 21 million lives lost, had the war not been sped up by the code breakers.

Turing created the first computer chess program, which he called Turbochamp, while he was trying to develop artificial intelligence. Turing had his colleague Alick Glennie play against Turbochamp. Although it wasn’t able to beat Glennie, it was able to play chess at a human level, showing that computers are capable of emulating a human brain to some extent.

Turing was openly gay during his life. In 1952, he was arrested for a relationship with a 19-year-old man named Arnold Murray. In court, Turing admitted to performing “acts of gross indecency” and was convicted for it. His punishment was either prison or chemical castration. He chose the latter and lost his job due to his conviction. About 49k are estimated to have been convicted and punished similarly to Turing until the Sexual Offences act of 1967, which decriminalized homosexuality. However, Turing was found dead at the age of 41 as a result of cyanide poisoning in 1954, 13 years before the outdated laws were replaced. It is thought that he committed suicide, but there are some indications that it was a result of accidental poisoning.

In response to his persecution, Turing received a posthumous royal pardon in 2013 and will be featured on the new British £50 banknote by the end of 2021.

It is unfortunate that Turing did not get the treatment he deserved for his accomplishments. He is an extraordinary scientist who is comparable to Charles Darwin, but he is not nearly as well known. However, Turing started to become a symbol and a martyr over time, inspiring people to reflect on their discrimination in the past. I hope that Turing’s story will become more well known so that people all around the world will be able to experience it too.