In a post written by Susan Eckert (teacher) and Shannon Huhn (student), the complex and complicated construct of race is broken down to reveal the true essence of society: genetics and the genetics of the skin.

Skin is one of the most important parts of our body. Firstly, as we studied in our immune system unit, we know that the skin protects us from sickness and from possible foreign invaders through the non-specific/innate bodily response. Specifically, however, our skin protects us from damage caused by UV light all because of melanin.

Although we may be familiar with this term as it is oftentimes involved in the conversation of race, research shows that the concept of race is not actually backed by science and the genetics of melanin. Before we can get into this conversation, we must learn about the science behind melanin. Importantly, our bodies contain cells called Melanocytes that produce the pigment called melanin. Through the process of melanogenesis, tyrosine is oxidized, which as we know from class means that it is losing electrons, and enzymes are utilized to produce two kinds of melanin: eumelanin which causes the skin to be dark, and phaeomelanin which causes the skin to be light. Although all of our bodies have the same amount of melanocytes, our skin color is determined by how much eumelanin and/or phaeomelanin is produced. 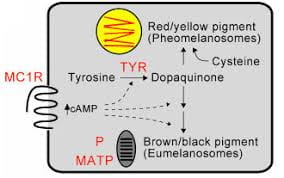 The production of eumelanin and phaeomelanin through oxidative and enzymatic processes.

With this knowledge, it is easier to engage in conversation on race. Throughout history, skin color has been used to fuel general racial inequalities. Darker skin, whose genetic purpose is to be able to absorb more light, has been wrongfully associated with inferiority while lighter skin, whose genetic purpose doesn’t involve absorbing a lot of light, has been associated with superiority, both based on the grounds of their appearances. Making these assumptions based solely on the physical color of the skin without acknowledging or thinking about the explanatory science should automatically negate these wrongful and incorrect accusations. According to Tiskoff and Kidd, “Humans are ∼98.8% similar to chimpanzees at the nucleotide level and are considerably more similar to each other”. Of course, we must take into consideration the confidence level and margin of error in this statistic, but nevertheless, the percentage is high, showing that race doesn’t make one inferior/superior as we are all essentially the same except for minor genes which produce specific skin colors. In general, it comes down to the production of pigments all based on necessary function.

We must combine what we know about melanin, genetics, skin, and race to move forward in our society. Although all are socially and genetically unique, we are all human on a genetic and molecular level. Conducting research and getting down to the science of various topics carries the necessary substantial weight to create change. What would you like to research next?

The Unsung Heroes of our Scientific World