A Super Self-Assembling Vaccine Booster to the Rescue!

Vaccines: a topic on the forefront of the minds of scientists, researchers, and the general public. With the novel coronavirus and fiery online debates led by coined “anti-vaxers” about the effectiveness and dangers of vaccination, biologists are racing to discover more methods to improve these life-saving injections. An essential component of many vaccines, including ones used to prevent cervical cancer, influenza, and hepatitis is the adjuvant: a “booster” ingredient that helps the vaccine create a longer-lasting, stronger immune response in the patient. Recently, a team of scientists in Japan discovered a new adjuvant—a molecule called cholicamade—that was equally as effective in treating influenza in mice as its predecessor, Alum. The emergence of this new ingredient is exciting, but the real novelty lies in the process these biologists used in discovering chloicamade: looking at molecules that could self-assemble.

What is the self-assembly of a molecule, or multiple molecules? Multiple molecules are said to self-assemble if they are able to organize into a defined pattern without the intervention of an external source, such as heat. These molecules will form ionic or hydrogen bonds with each other, similar to the joining of water molecules, since they don’t share electrons equally, as we learned in AP Biology. Identifying molecular structures that self-assemble is a common practice in materials science, but not often used in researching adjuvants. This team of biologists and chemists hypothesized that utilizing molecules that form in this fashion for disease treatments may be effective because pathogens in viruses also form through self-assembly. They wondered if a similar method in structural formation between a treatment and its virus would trigger a similar immune response.

And it did! Cholicamide self-assembles through ionic bonds to create a structure which looks almost identical to a virus, triggering the same immune system cells to react. The structure of the molecule 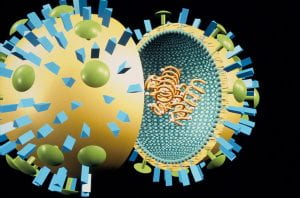 An image of the influenza virus, which the treatment would attempt to replicate.

lends itself to the formation of ionic bonds because of its inherent polarity and electronegative elements. The molecule can be injected directly into vacuoles that will connect it with the specialized receptors which will trigger the appropriate immune response. A vacuole’s ability to store water and other nutrients (as we learned in AP Biology) as well as transport these nutrients throughout an animal cell is vital in ensuring the treatment binds to the correct receptors. Uesugi, a leading scientist in the study, hopes “the new approach paves the way for discovering and designing self-assembling small molecule adjuvants against pathogens, including emerging viruses.” What do you think about this new method in discovering vaccine treatments? How do you see the future of vaccines changing as more adjuvants are researched? I believe there is nothing more exciting than not only confirming the effectiveness of a new treatment, but also conducting the research with a new approach or perspective.