In the past, doctors knew there were certain women were at a higher risk for having premature babies, such as having high blood pressure, diabetes, or multiples, but doctors have only recently discovered the significance of a woman’s microbiome at the beginning of the chain reaction in a woman’s body ending in birth.

Stanford researchers have created an “Immune Clock” using multiple factors, such as the mother’s “gut, vaginal and oral microbiomes, blood levels of proteins and metabolism-related molecules, plus fetal genetic material released into the women’s blood”. They have found that this algorithm creates extremely accurate results and currently has thousands of data points.

In a separate study, scientists discovered that women with more diverse inflammation microbes in their microbiome were more likely to miscarry. Although this research is interesting, broad conclusions are hard to draw because each woman has a different microbiome, based on not only their genetic makeup, but also their diet, environmental factors, and emotional stress.

Interestingly, a mother’s microbiome is not the only important factor for a premature baby. In a University of Rochester study on premature babies’ stool, they discovered the importance of a baby’s gut microbiome. Premature babies with more “good” bacteria in their diapers tend to fare better than those with less. 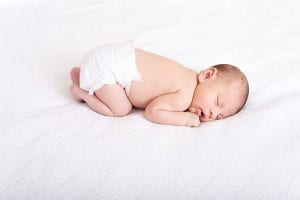 The image above shows a baby whose diaper will soon likely contain gut bacteria!

Today, many doctors in the NICU push premature babies to consume more calories, although this method alone often does not result in growth. Certain gut bacteria essential to growth thrives on different groups of food, and since there is a high importance in having distinct stages of a baby’s gut microbiome development, adjusting the baby’s nutrient consumption may help it to grow and thrive.

The often-overlooked property, the gut microbiome, has proved itself as an essential contributor to both mothers and babies to thrive. Would you ever submit your data to the Immune Clock to find out your risk of having a premature baby?