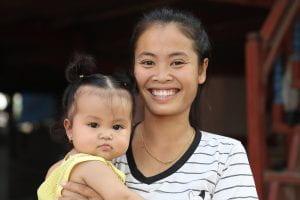 A photograph by Basile Morin shows a mother holding her baby

It has been known for decades that humans learn by imitating the actions and overall behaviors of their parents. In terms of learning speech, it is the memorization and imitation of syllables and sounds that allow humans to develop speaking skills over time. Still, there are some uncertainties as to exactly how the brain stores the memories needed to speak and whether or not humans can interfere with or alter the process. A group of scientists worked to answer these questions.

A recent study conducted by UT Southwestern Medical Center used zebra finches to test whether or not the memories needed to replicate speaking patterns could be formed without the use of another bird to imitate the sounds from. The answer was found through optogenetics, a process in which light is used to control areas of the brain. In the experiment, Dr. Todd Roberts, a neuroscientist with UT Southwestern’s O’Donnell Brain Institute, essentially encoded memories into the zebra finches’ brains by controlling the interactions of different regions of the brain using optogenetics. In this process, light was used to activate the neurons of a desired region of the zebra finch’s brain. The duration of time the light was shown of certain neurons corresponded to the duration fo time a syllable of a song was sung by the bird. This action-reaction process was a new “memory”. The zebra finch would now use this event as a memory to try and replicate again to learn full songs. 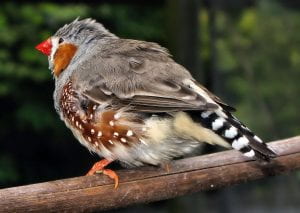 This photograph shows a zebra finch perched on a branch.

Dr. Roberts stated, “We’re not teaching the bird everything it needs to know — just the duration of syllables in its song.”

This discovery gives pathways to understanding different speech related circuits in the brain. Just this little piece shows that it is possible for the memories we use to learn how to speak to be generated by an artificial source, and not a living mentor.

Zebra finches vocal development is very similar to that of a humans; they hear a note sung by their father, memorize it, and repeat it. The discoveries found in this study are “providing strong clues of where to look for more insight on neurodevelopmental disorders,” says Dr. Roberts. This study could provide evidence and guidance to helping those with autism, a condition that often effects language and speech development in an individual, as well as any other neurological disorder that affects the brain. Technology and research like this can help so many people struggling with speech disorders. I believe it is important to take advantage of the resources we have today and use them to help people who need it. Do you agree? Leave a comment below!

Can Too Much Sitting Affect The Shape Of Your Heart?