The journal Cell Host & Microbe recently published Vanessa Harris’s and her team’s (scientists from the Netherlands) research regarding a rotavirus vaccine. Over 200,000 children each year die from rotavirus. It is the prominent cause of diarrheal death in children. Therefore, this line of research is essential to help ensure the global health of all people, especially children.

Harris’s study consisted of sixty-three, healthy male adults. They were randomly assigned one of three possible arms (branches of types of antibiotics): a broad spectrum (with vancomycin/ciprofloxacin/metronidazole treatments), a narrow-spectrum (with a vancomycin treatment) or the control with no vaccine. After this treatment, the results of the antibodies were tested by the subjects’ viral shedding. The three treatment arms led to similar antibody levels although there was a small increase in viral shedding with the narrow-spectrum antibiotic. Most importantly there was an overall difference in between the antibiotic-treated groups compared to the control arm, with the antibiotic treatments resulting in higher viral shedding. Their results showed an impact of antibiotics on microbiomes reaction to the vaccine.

The research team also worked with children in Ghana and Pakistan which found a correlation between immunity to the rotavirus vaccine and the presence of a specific, intestinal bacteria. A vancomycin arm was added to attempt to recreate similar results to the earlier study with the adult men. Because rotavirus is a childhood disease, the main outcome of this second half of the study was that further, more detailed and specific research is necessary.

I believe that the scientists are correct in saying that more research is necessary in order to support any large conclusion, yet it seems to me that bacteria can clearly alter microbiomes reaction to rotavirus vaccine. In my opinion, whether that is a mostly positive or negative effect must be the next step in the research in order to use this information to help children in developing countries like Ghana. Most important, the fact that “…[Harris’s] team believes that understanding that triangulation between bacteria, virus, and the human immune system has the potential for vaccinology and can lead to important uses of the microbiome”, should be the driving factor behind research into human microbiomes. 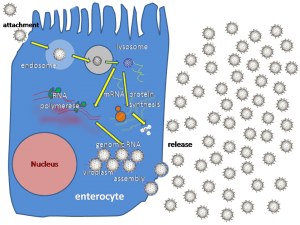