Even a bee is better at playing soccer than I am. Ecologist Olli Loukola of Queen Mary University of London and his team have taught a number of bumblebees (Bombus Terrestris) to move a wooden ball to a specific point to be rewarded with food: AKA, Bee soccer (boccer?). The scientists had a number of bees in the stands, watching and cheering on the pro soccer players. After watching three intense games, the bees that had originally only attended the pro soccer games were put into the field. It’s a rags to riches tale of a bee that once only dreamed of playing soccer getting a chance to make it pro. Under pressure, the novice bees scored goals nearly every time, truly proving themselves to be professional bee soccer league material. However, bees that did not watch the soccer games beforehand only scored 30% of the time. 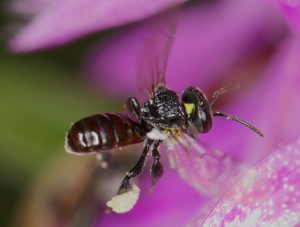 While this seems like simply a fun spin off of the bee movie, it was actually a productive use of the researchers time! The fact that the bees were able to learn how to perform a task shows that they have the ability to pick up on social cues. While it took a while for the researchers to teach the initial pro bee soccer players, the second group learned how to play much faster just by watching other bees perform the task.

In a second type of bee soccer, the researchers put three balls in front of the bees. Two of them were glued down to the table, and the third (which was farthest from the goal) was free to roll. While the untrained bees watched, the coach bees were only able to score using the third ball. However, when three balls that were free to roll were presented to the untrained bees, nearly all of them moved the closest ball to the goal, rather than the farthest one that they had seen the instructors use. This proves that the bees were able to actually think about their actions, rather than just imitate the actions of the bees before them. We may see bee olympics in the near future. Or they might take over the world. Be(e) prepared for both.