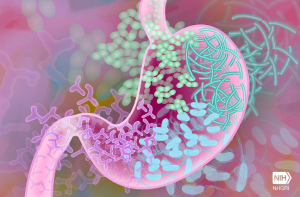 According to an article on Science Daily, Westerners have a very different human gut than hunter-gatherers. Research suggests that Westerners tend to have a less diverse human gut. However, the reason for why is still unclear. Researches from this study have observed two particular groups of people. The hunter-gatherers, known as BaAka pygmies, relied on foods such as fish, fruits, and vegetables. Whereas the group of Westernizers, the Bantu, relied on a market economy. The Bantu grew fruits, other plants and raised goats. They also used antibiotics and therapeutic drugs available.

The results of the study revealed that while the  BaAka and Bantu gut microbes were from similar bacterial species, the abundance of traditional bacterial groups was decreased in the Bantu. When researchers delved into what could have caused the difference between the two groups, they found that diets are the most important driver of microbiome composition in humans.

Another study done by evolutionary biologist, Andrew Moelle, suggests that humans and animals have inherited some bacteria from their ancestors. Moelle studied three types of bacteria living in the feces of wild chimps, bonobos, gorilla and a group of people from Connecticut. He concluded that 2 of the three bacterial trees matched primate relationships. Moelle also expressed how these relationships are getting harder to study due to the effect that industrialization and antibiotics have. They have reduced the diversity of bacteria living in and on humans.  Microbial geneticist, Julia Segre, expressed that humans have been exposed to antibiotics and modern life and as a result, Wild African apes might “still have their ancient gut flora, but the people in Connecticut might not.

A study done by Howard Ochman found that human guts most closely resemble the gut of a gorilla. Like the other researchers, Ochman acknowledges that as a result of modern humans there is a loss of microbial diversity. He also explains how this can be a problem because humans have lost a number of bugs that help digest plant matter. However, humans have gained others that help digest meat.