Myxozoa are tiny parasites that infect fish stock and other aquatic life. Once thought to be unicellular, these multi-celled organisms have recently been analyzed more closely. Containing more than 1300 different species, these highly unusual microorganisms had their DNA sequenced by researchers at the University of Kansas. 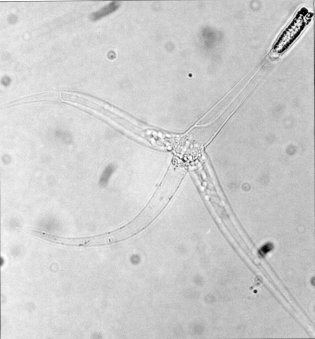 Myxozoa show many similarities to cnidarians, a phylum that contains jellyfish, corals, and sea anemones. One of the key similarities is the presence of the nematocyst, a weapon or defense mechanism that members of the cnidaria phylum possess. This and other traits were once attributed to convergent evolution. However, this theory was debunked by their gene sequences. On further inspection, these microorganisms are actually tiny jellyfish living on other organisms.

The average cnidarian contains 300 million base pairs. However, Myxozoa have been stripped down to about 20 million base pairs, 15 times less. Despite this reduction in genome size, Myxozoa still contain the genes to express the creation of a nematocyst. These microscopic organisms have one of the smallest animal genomes reported.

The categorization of these organisms is shaking up the foundation of what we can call an “animal.” In the past, animals were classified by whether they had certain genes instrumental in their development such as Hox genes, genes that influence body structure. Myxozoa have no such gene. Since organisms are also classified based on their ancestors, this fumbles the system.

Because of this discovery, scientists are questioning whether this type of backwards evolution from a macro-organism to microorganism is more common than we think. Other microscopic organisms could potentially become “animals” as a result.

This also opens a gate to greater understanding of the organisms in our aquaculture. Many fish are affected by the parasitic nature of Myxozoa.

Next time you eat salmon, notice that you could also unknowingly be eating tiny parasitic jellyfish.