Why do we actually care about celebrities?

Celebrities are a huge facet of many people’s lives. They fill the news and occupy hours of thought from millions of people who don’t even know them on a personal level. Why is there such a huge fascination with celebrities? It turns out that it all links back to our primal nature.

All primates experience the competition for resources within their ecosystem. Granted, some experience this more fiercely than others, but there’s no doubt that it exists in all primates. Let’s look at the savannah baboon, for example. The most defining factor in the life of a savannah baboon is its societal rank in a sex-specific dominance hierarchy. These baboons are constantly observed stealing glances at the most dominant of their pack. Social status is always on their minds. This ranking system is not an anomaly for the savannah baboon. It makes sense. With the hierarchy in place, there’s less fighting, the distribution of food is more orderly, and mates are chosen more easily.

In humans, things get a bit more complex. We simultaneously belong to several hierarchies, valuing most the one we rank highest in. Despite the complexity, the general idea remains the same as that of the savannah baboon. Over the course of our evolution, this hierarchy of social dominance has remained deeply ingrained in our brains. Psychology professor Nicholas Rule found that humans could correctly identify whether a face was of high or low social status in a mere 40 milliseconds. A study by Lotte Thomsen of Harvard shows that ten-month-olds are already accustomed to the idea of dominance and social hierarchy.

To find out more, scientists are looking at brain scans. When subjects evaluate social status from faces, they are using the “fanciest, most recently evolved part of the brain, the frontal cortex.”(http://nautil.us/issue/5/fame/on-the-origin-of-celebrity) Caroline Zink of the Lieber Institute for Brain Development found that if a subject observes two people  flip-flopping in their standing on the social ladder, the amygdala is also activated, which is responsible for processing fear and anxiety. 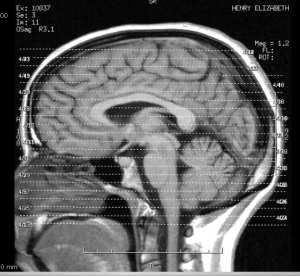 Looking into the lives of celebrities entrances people because most often, celebrities hit the news because they did something foolish or embarrassing. For that one instant, we feel like we are on even footing with the “alphas” of our society by being able to gossip and joke about them. Caring about celebrities is literally part of our brain, and shows that we have a common ancestor with primates.  As someone who has never taken a big interest in celebrities, maybe it’s time to get my brain checked out.