Today, thanks to modern technology and social networking, there are few parts of the world that remain inaccessible. You can learn things about places you have never been just from looking on your computer screen. However, there are still small parts of the world unexplored and untouched by humans. Antarctica is one of those places sheltered from humans by impossible weather and environment conditions.  “In fact, About 98% of Antarctica is covered by ice that averages at least 1 mile (1.6 km) in thickness” and the average temperature of the continent is -49 degrees celsius.

Explorers and scientists have attempted to learn what they can about the frozen continent but time spent there is limited. Even more seemingly impossible to reach is the Antarctic Ocean Floor. It is tough to study the “extreme Antarctic environment, where observations are very rare and ships could not go”.  To fix this gap of knowledge, scientists attached sensors to the heads of elephant seals. These seals are adapted to the freezing conditions so they can survive in the Arctic ocean with a temperature average of .5 degree celsius. 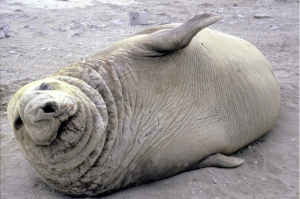 Thanks to the elephant seals, “scientists better understand how the ocean’s coldest, deepest waters are formed, providing vital clues to understanding its role in the world’s climate”. The seals allowed greater insight to the Antarctic bottom water-

“a layer of water near the ocean floor that has a significant impact on the movement of the world’s oceans”. These areas were previously known of but no real data had been obtained. The seals went to areas of the coast line where “no boat could ever go”.

Studies have shown 50 year long trends in these deep water changes. Scientists hope the new data obtained through the seals will help to further uncover these trends that affect global climate change.