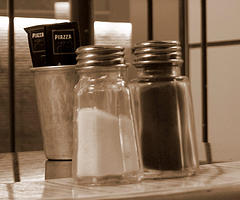 As a salt hater myself, I find it hard to understand why my grandmother pours salt over salads, soups, even “bland” sandwiches. Why she seasons all her food so that it tastes like salt water was always a mystery to me.

So why DO some people like salt while others hate it?

The answer may lie in what parents feed their children between the ages of two months and six months- sometimes unknowingly giving their children food with lots of salt.
According to the study, infants who ate only baby food and other natural foods like fruits and vegetables (all of which contain little or no salt) during their first six months disliked or were indifferent to salty foods by preschool age. On the other hand, the children who had consumed salty foods in infancy preferred salty foods over food without salt. Unfortunately, these children tended to adore unhealthy, salty foods like potato chips, French fries, hot dogs and pretzels.

The good thing about consuming salt is that it is necessary for humans to function properly.
For example, humans need salt to make the digestive acid, hydrochloric acid. Also, oftentimes it is mixed with iodine – another element necessary for human life. In the late 900’s, salt was worth its weight in gold in many African kingdoms simply because it is so vital.

So how much salt is too much?

On average, a person needs to consume about 500 mg
day. However, most americans consume ten times that amount.

We Americans have trouble consuming too much salt. Too much salt can lead to hypertension and heart attacks. Normally, the kidney filters the blood so that excess salt will be released in the urine. However, when people eat huge amounts of salt, some of the excess remains in the bloodstream. For some people, the increased salinity in the blood causes blood pressure to rise to unsafe levels. Unsafe because, as we learned in class, hypertension can lead to heart attacks and strokes.

So, for most babies it is better when the parents stick to low sodium foods, especially since the infants showed no preference for salt at two months, meaning that my grandmother, and other “salt lovers” probably aren’t born with their love of salty foods. Salt “loving” seem to be a behavior that, once moulded between the ages of 2 and 6 months, has lasting effects on that person’s preferences.