Do you enjoy eating foods that taste sweet? Do you also like to eat meat? Well, what would you do if you ate so much meat that your genes responsible for detecting the sweet taste suddenly stopped? Would you be upset? I certainly would be. Thankfully, humans do not have to worry about this problem yet, but a recent study shows that animals that are specialized carnivores have lost the power to taste sweetness. 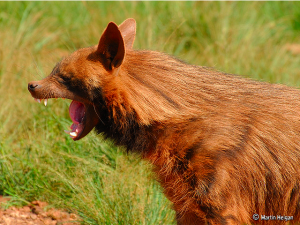 The study analyzed twelve different mammals and their sweet detector gene Tas1r2. The researchers found that in seven out of the twelve animals, Tas1r2 experienced mutations. The gene carried disabling glitches in hyenas, otters, fossa, banded linsang, sea lions and two different kinds of seals. What these animals have in common is that they are all predators. The study’s coauthor Gary Beauchamp believes that this means that the mutations in Tas1r2 “could easily spread through populations.”

While these carnivores have lost their ability to taste sweetness, this loss is not universal among meat eaters. For example, animals like red wolves are fervent meat eaters, but have not lost their genetic sweet spot. Beauchamp believes that the carnivores that have not lost the function of this gene will soon lose it in the future due to evolution.

However, there are many arguments in opposition to Beauchamp’s proposal. Animals that do not specialize in meat may have also lost their ability to taste sweetness. Chickens eat both plant and animal foods, but do not seem to notice sweetness in their food and appear to lack a functional Tas1r2. Huabin Zhao of Wuhuan University in China believes that chickens are just one reason that Beauchamp’s conclusion is not convincing. Zhao suggests that “narrow diet specialization might be a better explanation” for the meat-eater sweet-loss scenario.

to see if there will be disabling genetic glitches in Tas1r2 in other types of carnivores in the future. If this does occur, then this genetic mutation has the potential to shape the evolution of carnivores. Similar to these carnivores, people have also had their “use-it-or-lose-it” sensory evolution. For example, humans are not great at detecting odors and even worse when it comes to noticing pheromones, the strong animal-to-animal chemical communications. Only time will tell if the mutations of Tas1r2 will spread to all carnivores, but let’s hope humans do not lose the functionality of their sweet detector gene because sweet food tastes too good!