Who ever knew a movie staring Jude Law, Uma Therman and Ethan Hawke does not just explore romance and drama but also takes a look into the revolutionizing and weary scientific future our world has yet to see!  The movie, GATTACA(standing for the 4 DNA bases-Guanine, Adenine, Thymine, Thymine, Adenine, Cytosine, Adenine), starts with the birth of Vincent Freeman, an ordinary child just like you and me.  But unfortunately for him, Vincent falls way below average in his society that revolves around eugenics.

I belonged to a new underclass, no longer determined by social status or the color of your skin. No, we now have discrimination down to a science. –Vincent Freeman in GATTACA

This discrimination that Vincent is referring to is based on ones genetic profile.  In the GATTACA world, the creation of a child occurs in a lab, where there parents can choose what genes they want and don’t want their child to inherit, making for one, almost genetically perfect kid.  In the movie, they have facilities that resemble bank tellers but are in fact genetic “profilers”.  One can bring a strand of hair they found to the facility and receive a print out of that persons genetic profile, along with it stating if that person is Valid(genetically engineered) or invalid(ordinarily created).  Because Vincent was not created this way he is forever categorized as In-valid, causing him to have limited options in life, like not getting hired.

I don’t want to give away more of the story, but it goes into deep investigation of what this world, that potentially can one day happen, would be like.  It questions the morality and ethics behind genetic modification, profiling and discrimination.  It also shows a very depressed world devoid of joy.

In today’s world, we already have genome services similar to the ones in GATTACA. The company 23andMe can create your genetic profile with a swab of your DNA.  You can find out what your genetic ancestry is life, what disease you are at risk for, why you like the foods you like and so on.  Some people are very hesitant to viewing their genetic profile. after reading this article, of a women who had her genetic profile made through 23andMe, do you think you would want yours made?  Why or why not? 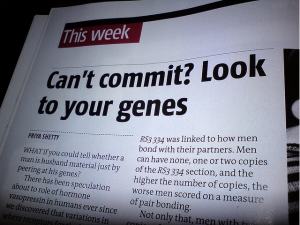 In a developing world filled with baby formulas, breast pumps, certified milk banks and informal milk banks, it is hard to know what choice is the best when it comes to providing for your child.  A recent NY Times article discusses the benefits to breast milk and explores the differences between certified milk banks and informal ones.  The article quotes a gay male couple that use breast milk, from a stranger they found online, to feed their infants. Although the FDA discourages this type of milk market, the couple seems to be very fond of it.  Not only are the high prices and low stocks of the breast milk at certified and established milk banks that screen all their donors a turn off to many parents, but also the fact that these “safe” milk banks pasteurize their milk “because the heating process destroys some of the very substances — some of the milk’s immunoglobulin A, for example — that they are seeking in breast milk.”  The article has no answer as to what the best and safest way to feed an infant is, and no one does, it seems to be a personal decision.  This website, along with the NY times article,  is a good place to weight the pros and cons of formula, personal breast milk, and milk banks.  The Human Milk Banking Association of North America also gives lots of information about their screening and packaging processes of breast milk.

So what do you think the best way to obtain milk for your baby is if you can’t use your own breast milk? 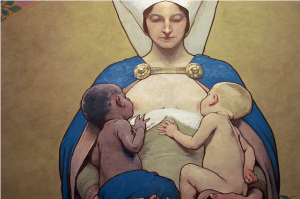 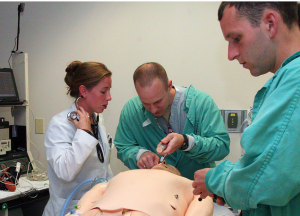 You’re Never Really Off The Hook

Thanks to the incredible DNA technology, changes in law, and criminal databases, police and scientist were able to convict the criminal of a murder case from 1993 seventeen years later!  On August 15th, 1993 when James Hawkins was found stabbed and dead in his apartment, the police could not find a lead whose DNA matched the DNA of the murderer’s blood in Hawkins’ apartment and the case was closed.

In 2000, the results from the DNA test of the blood found in Hawkins’ stairs were entered into the national DNA database for law enforcement criminals.  Then in 2008 a man named Gorden Francis was convicted of criminal trespassing, a misdemeanor that is categorized as a lower-level offence.  Thanks to a law amendment in 2006 that stated convicted criminals of lower-level laws were mandated to provide a DNA sample, Mr. Hawkins murderer was found.  With both the DNA from Hawkins’ apartment and Francis’ DNA from his crime in the national DNA database, a match was found. The case was reopened, and Gordon Francis now faces life in jail!

If it weren’t for the incredible enhancements in DNA technology in recent decades many innocent people would still be in jail, and many criminals would not be convicted.  The process of DNA profiling is quite meticulous but well worth it. DNA is found in most cells of the body; so at a crime scene a DNA sample can be found in sweat, skin, blood, earwax, saliva, semen, hair.  The DNA is then extracted from nucleus of the cell with chemicals that break open the cell and extract the DNA.  Then there are various ways to study the DNA but a common technique used is short tandem repeat (STR) analysis.  Normally the small STR, regions of non-coding DNA that contain repeats of the same nucleotide, samples are amplified via a polymerase chain reaction (PCR).  This copies the DNA similar to the way DNA copies itself in a cell. Once there is enough DNA to study, the STR analysis is used to examine how often base pairs repeat in specific locations on the DNA strand. The FBI declared that 13 specific STR locations are required for DNA analysis.  It is extremely unlikely for anyone to have 13 identical STR patterns and location, the chance is greater the 1 in 1 billion.  The DNA is then transformed to a DNA “picture” or profile.  The profile has columns of dark colored parallel pars that depict the persons STR.  In a crime scene, the convicted persons DNA profile would be identical to the DNA profile of the DNA from the crime.  Here are two websites that have more detailed explanations of DNA profiling with pictures- site 1, site 2.

Thanks to unit 1 of AP biology, we know where the DNA is found and made in a cell and what the nucleotide sequences in STR are.  DNA is a nucleic acid made of many nucleotide monomers consisting of a nitrogenous base, a five-sugar carbon and one phosphate group.  The uniquely patterned paired nitrogen bases surrounded by the 2 anti-parallel sugar phosphate backbones makes the double helix structure of DNA. 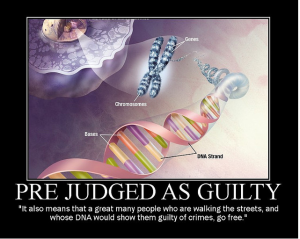 This  “Pre Judged As Guilty Picture” represents the feelings of many people.  For example, a judge in Wales, UK thinks it should be mandated that every UK citizen and visitor should have his or her DNA sample stored in a database so the guilty can be convicted and the innocent are freed.  Do you think that this is a violation of privacy and a lot of corruption and fraud could end up happening? Or do you think it’s a great idea and every USA citizen should have his or her DNA in a database?