“Trauma#neuroscientist,#author, artist, social justice activist, mental health advocate, unionizer, survivor/recover-er/contender of rape/addiction/#PTSD” This is the Twitter bio of Dr. Apryl Pooley, a neuroscientist who is studying sex differences in traumatic stress response using sperm producing and egg producing Sprauge-Dawley rats. Through her work, she came to the discovery that “trauma has divergent sex-specific effects at the behavioral, physiological, and cellular levels,” an idea that hasn’t been explored in modern neurobiology. 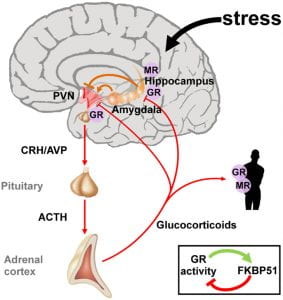 Dr. Pooley and her research team utilized two known identifiers of PTSD-like response in rats to monitor these differences between the males and females. One was the acoustic startle response (ASR), an involuntary contraction in the facial and skeletal muscles “to a sudden and intense startling stimulus,” and the other was the dexamethasone suppression test (DST), a test used to examine adrenal gland function after the administration of dexamethasone, a steroid that “provides negative feedback to the pituitary gland to suppress the secretion of adrenocorticotropic hormone (ACTH),” which is released in copious amounts in the presence of a biological stressor. In PTSD patients, enhanced ACTH suppression is consistently found after this test is performed, since the patient responds to the negative feedback loop which quells the excessive release of ACTH. While the male rats demonstrated a high startle response and this expected negative feedback control in the pituitary and adrenal glands, the female rats showed symptoms more common to depression in response to the stressor. This contrast lead to Pooley’s conclusion that the “trauma response of male and female rats is fundamentally different,” and that it is important to understand these differences to pave “the way for improved diagnostics and therapeutics that effectively treat both men and women.”

Her interest in trauma and PTSD, especially her “goal of determining how a traumatic event affects people differently,” stems from her personal experiences and struggles. While she was researching Parkinson’s disease in her doctoral training at MSU, she came across studies of PTSD symptoms and realized that is what she had been coping with her entire life after being raped as a teenager. She “didn’t know that rape could cause PTSD,” and became dedicated to helping others learn about the devestating effects and causes of traumatic stress response. She also struggled with an alcohol addiction to cope with her trauma and eventually sought help from counselors and psychiatrists. During her journey of recovery from alcoholism, she wrote a book about her experiences titled Shadow Brain: A Neuroscientist’s Journey through PTSD and Womanhood and changed her Ph.D. research to looking at PTSD, with a concentration on how symptoms present in women.

Dr. Pooley is an inspiring scientist, activist, and survivor that is making history with ground breaking research in behavioral science. She is “excited” to continue finding “biological evidence for why men with PTSD tend to show signs of aggression and anger and women with PTSD tend to show signs of anxiety and depression” and shedding light on how behavioral health disorders and trauma affect women, a topic underrepresented in current scientific research. She especially hopes that her work leads to the development of increasingly effective treatment resources for sexual assault survivors, women, and LGTBQ+ people who have experienced trauma or struggle with PTSD. How do you think we can amplify the voices of female scientists studying behavioral health and trauma like Dr. Pooley? How do you think her work is changing the portrayal of behavioral and mental health in the scientific community?