How polio Initially affects your body –

According to an informative article by Khan Academy, Poliovirus typically enters the body through the nose and the mouth and will immediately start to infect the cells of the lining of the larynx. The virus will then travel to the intestines where it will begin to reproduce rapidly. After a week of being infected the virus will start to spread to your tonsils and other parts of the immune system. Gradually the poliovirus will break into the bloodstream where it then can be transported around your body. Most of the time the virus will be eradicated in the bloodstream or in the intestines but in some people, it can infect the Central Nervous System. If it reaches the CNS it will begin to replicate inside of the motor neurons and copy itself thousands of times. Then when it is ready it will kill the neurons and spread to even more uninfected cells. The disease will then fall into three classifications depending on where the neuronal damage is occurring. 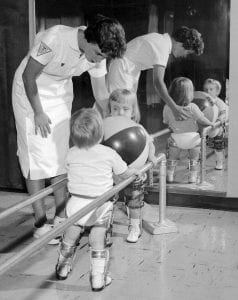 This is the classification when the poliovirus kills the motor neurons in the gray matter of the ventral horn of the spinal column. As the cells in the region are dying off the muscles of the limbs are not able to receive signals from the CNS so they begin to atrophy and become weak. In a few days, the patient will be fully paralyzed. This is the most common form of polio.

This form of polio is not as common as spinal polio. It is classified by this when the poliovirus infects and kills neurons in the bulbar region of the brain stem. This affects the muscles we use to speak, swallow, and breathe.

About 20 percent of people will get bulbospinal polio where they have both bulbar and spinal infection. In this situation poliovirus infects the upper part of the cervical spinal cord making the diaphragm paralyzed.

An article by Science Direct and the American Society for Microbiology explains the structure of Poliovirus. Poliovirus is characterized as a nonenveloped virus and is composed of an RNA genome and a protein capsid. The genome is a single-stranded RNA genome and is 7500 nucleotides long. The shape of the virus is an icosahedral capsid and it belongs to the Picornaviridae family. Because poliovirus is a nonenveloped they don’t follow the same pathways as enveloped viruses take. Usually, with an enveloped virus the virus will deliver nucleocapsids to the cytoplasm of cells and fuse with the viral membrane with the host cell membrane. Instead, nonenveloped viruses will need to travel within the organelle membranes and infect specific cellular structures that would support the arrival of a virus to the cytosol. This is made possible when the virus penetrates across the endomembrane of the host cell which allows the virus to infect the cell. 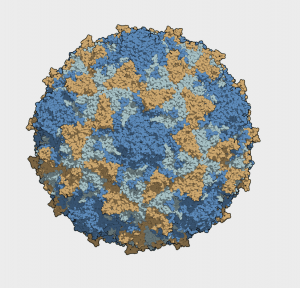