So, as we know, manta rays are really cool. I mean, what kind of organism has wing-like features, can soar through water at nine miles per hour (two times faster than the speedy Michael Phelps), and is pretty cute? The answer: manta rays. The fact that they can swim really fast is no coincidence; nature built them this way. Researches just found another way that these rays are built to be the Lightning-McQueen of the sea (Lightning McSea). It has been discovered that manta rays have some sort of special filtration system used to separate their meal (plankton) from all other unnecessary stuff (fluid). 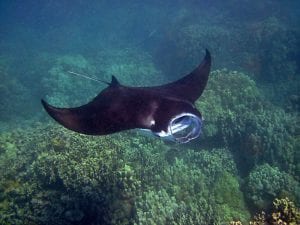 Look at this guy eat!

Well, yes, they are Filter Feeders, so what’s the Big Deal?

Most people used to think that all filter feeders were able to filter the same way: like pasta in a strainer. However, this analogy is not applicable to the awe-striking manta rays. They use a series of lobes and gaps to separate their meal from all the other stuff that comes into their mouths. The lobes act as walls, kind of, so that when the water passes through this space, the plankton ricochet off of the lobes, kind of like pinball, until it reaches the esophagus and goes down the hatch. The water in the vortex is able to eventually maneuver out of the manta ray’s mouth and back into the ocean (backwash much?). More specifically, the water gets pulled into vortexes that release it back into the ocean. The plankton are able to avoid these vortexes by bouncing off of the lobes which will eventually lead them to the esophagus. This contributes to their efficiency because with this system, they can just continuously have their mouth open. They don’t need to close their mouth to ‘clean their filter’.

Did Researches Watch Manta Rays Eat Until they Noticed Something?

The way this was discovered was by running a set of simulations to test what would get clogged in the ‘filter’. The researches noticed that when testing particles smaller than the pore size (which would be expected to go through if it were a pasta-draining mechanism) did not go through. With further analysis including dying particles to track their journey, they concluded that the manta ray had some sort of pinball mechanism helping them out. This new finding could help other studies in trying to capture small particles. This is really ground-breaking because until now, filter feeders’ mechanisms were all thought to be pretty much the same. This completely opens the door for more research to be done on other animals that are presumed to have the same mechanisms. It’s great to ask questions like ones that lead to this discovery, and even better to find their respective answers.

Do you think this discovery will lead to more research on filter feeders?

What other applications of this finding can you think of?

If other particles do manage to get through, do manta rays have cells that are able to break down things that aren’t what they normally eat?

Would they rather be in areas with low concentrations of small stuff, so it’s less of a chance something might get caught or in high concentrations, so there is more food per square foot? Would you hypothesize a taxis or kinesis reaction?