Did You Know Plants Can Talk? 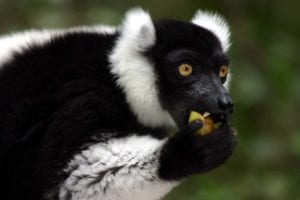 For thousands of years language has been a crucial part of cultures around the world, and a method unique to humanity of transmitting ideas, thoughts, emotions between us. Language has allowed us to work harmoniously together for our mutual improvement and survival. Recently, however, two researchers, Dr. Kim Valenta and her colleague Omar Nevo, have discovered that plants too, have developed their own unique and intricate method of conveying information to their pollinators; “the easier it is for fruit eaters to identify ripe fruits, the better the chance for both [, the plant and the fruit,] to survive.

The most vivid example of plant communication can be found in Madagascar’s Ranomafana National Park and Uganda’s Kiabale National Park where berry plants have evolved “to match each animal’s sensory capacities, [thus] signal[ing] dinner time in the jungle…” Dr. Valenta and Nevo analyzed the exact colors of each fruit with a spectrometer, and “with a model based on the visual capacities of the seed-dispersing animals, they also determined who was most likely to detect different fruit colors contrasting against an assortment of backgrounds.” The researchers concluded that “the colors of each fruit were optimized against their natural backdrops to meet the demands of the visual systems of their primary seed dispersers,” i.e. pollinators. Thus, red-green color-blind lemurs, in Madagascar were best able to detect the fruit with a blue yellow color scheme and monkeys and apes in Uganda, with tricolor vision like humans, were clearly able to distinguish red berries against a green backdrop.

Also recently discovered was that plants can communicate to their pollinators through scent. Dr. Nevo performed a scent-based study on the lemurs in Madagascar. His team collected various ripe and unripe fruits from all over the jungle of Ranomafana. “He suspected the leumur-eaten fruits would have a greater difference in odor after they ripened than the bird-eaten fruits.” To discover exactly how this scent-based communication worked, Nevo used the “semi-static headspace technique.” From this experiment it was confirmed that “fruits dispersed solely by lemurs produced more chemicals and a greater assortment of compounds upon ripening. It is now known that wild lemurs actually spend quite a lot of time smelling for the vivid difference in odor between ripe and unripe fruits in the jungle.

It is astonishing how plants have evolved over the years to be able to communicate with their pollinators for the betterment and expansion of their species. I would be interested to find out, what other organisms communicate (single cellular, multi-cellular, etc.) and what kind of information they find necessary to convey to others for their survival?