The plant that is commonly used to treat flu and cold symptoms, Echinacea, is beginning to suffer from a disappearing habitat. A flowering plant part of the daisy family, Echinacea grows in central and North America in mostly dry, wooded areas. As one of the “top five” herbal remedies sold in retail stores, the coneflower is regarded as an American staple to relieve suffers’ of the cold and flu. However, their habitat is in decline from human activities, bees, and deadly aphids 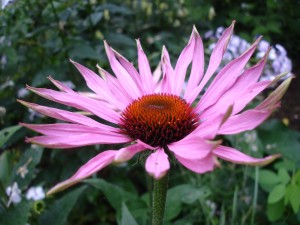 Certain human activities have caused wildlands to shrink and splintered the landscape. As one of the most endangered habitats in the world, tailgrass prairie is throughly studied by scientists in order to track how Echinacea reacting to its changing environment and they are also working to save these prairie patches.

Bees have been known by scientists to pollinate the coneflower plant, Dr. Wagenius says “A bee might have been able to fly across a hundred mile expanse of coneflowers. Could it still do that today? No way.” Pollination for these plants is not at all where it should be, as bees can only pollinate these plants up to short distances.

Coneflower plants are now becoming genetically related in the prairies. If a bee brings pollen to these different plant siblings, the plant may reject the pollen. Therefore, there are no new seeds and populations decrease. A new danger to the coneflower is aphids; they devour prairies of Echinacea. As well, scientists urge prairie farmers to set fire to habitats (since they are necessary to these ecosystems). By inducing the plant to flower, new genetic diversity may be reached.

Another reason to not cut down old trees