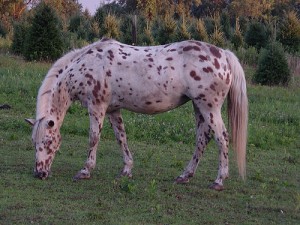 DNA and Cave painting seem like two things that are incredibly unlikely to go together.  However, a new study on DNA are proving that the cave paintings in France dating back 25,000 years show accurate portrayals of the horses in them rather than just symbolic portrayals.  The team which includes researchers from the University of York as well as researchers form the UK, Germany, USA, Spain, Russia, and Mexico, took the genotypes and analyzed nine different coat color loci in 31 horses (pre-domestic horses specifically) which were from about 35,000 years ago.  To do this they analyzed bones and teeth found in 15 locations.

What they found surprised them as they assumed, as most people did that there were only bay and black coats at this time, but they found four pleistocene and two copper age samples form europe which showed a leopard phenotype.  Though there were 18 bays and seven black horses the fact that they could prove that there were leopard phenotypes proved that the cave paintings were a true representation of what was around the people at this time, not simply symbolic.  This study showed not only the value of cave paintings, but also the importance of the relationship between science and history.

The Importance of a Teenage Balanced Diet