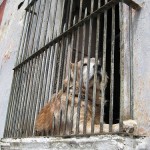 While applying to college, be glad you’re not a dragonfly.