Roughly 30 million Americans are “just trying to catch up on their sleep.” 20% of Americans report that they get less than 6 hours of sleep on average. This nation-wide sleep loss is “taking a toll on our physical and emotional health, and on our nation’s highways.” Sleep loss leads to a variety of inconvenient issues. 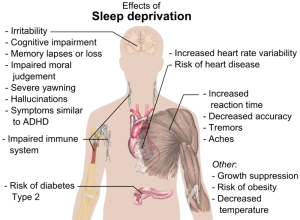 According to Discovery Health, Inability to handle stress, inability to concentrate, poor memory, poor decision making,  increased appetite, diminished motor skills, relationship trouble, medical problems, and mood swings can all be the ill effects of sleep deprivation. This has been known by scientists for a long time, but the reasons on a molecular-level were unclear.

However, recent headway has been made in understanding the consequences of sleep deprivation on a molecular level. A new study at the University of Surrey in England showed changes in gene activity in 26 people who had built up a sleep deficit. Reports in the Proceedings of the National Academy of Sciences showed that after a week of considerable sleep deprivation the blood tests of the 26 subjects showed changes in 711 of their genes.

The “changes” observed in the genes including a disruption of the cell cycle; the cells stopped their circadian rhythm. On the other hand, cells that don’t typically follow a cycle fell into a daily rhythm. Many of the genes that showed changes were related to the immune system. This would account for the previously and widely observed medical issues connected with sleep loss. “The researchers conclude that skimping on sleep can drastically change the body’s daily rhythms and may lead to health problems”.