In a recent article from Nature, researchers observed mating patterns in guppies. While most guppies are plain in color, a few male guppies are vibrant and have interesting color variation. In the lab at Weill Cornell Medical College, it was seen that these colorful males father the most offspring. This is due to negative frequency-dependent selection, or the “rare-male effect“. Because the colorful male guppies are rare, they are attractive to female guppies looking for a mate. The variation in color is an effect from the guppies’ genes. Theoretically, these color variations were supposed to be “normal” a long time ago, because of Darwin’s Theory of Evolution. Rather than conforming to the common pattern, the few males that are colorful show bright colors and diverse patterns. Apparently this is due to the rare male effect. Female guppies simply prefer rare guppies and do not care for the pattern.

Although the results prove this theory in the lab, the researchers were doubtful that this happened in a natural setting. Therefore, the scientists went to Trinidad to see the guppies in their wild setting. They collected the colorful males, numbered them and then released them. Next, they waited for the guppies to mate and then counted their offspring. They did this twice. The first brood showed that the rare male effect was present, but the second did not. The researchers questioned, even though the effect was present in the first brood of offspring, the staying power of this effect. The scientists believed that the effect’s purpose was to prevent insect, which hinders the evolution of the fish.

Why are the mating patterns of guppies so important? What can they help us with in future research? 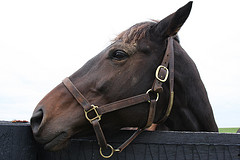 According to the article, “How the Quarter Horse won the Rodeo” , quarter horses are known for their superior speed, agility, and tranquility.   Why are these horses so superior? According to BioMed Central’s open access journal, BMC Genomics, used sequencing to map variation in the genome of the quarter horse male. The sequencing revealed that the quarter horse’s genome was enriched for variants in genes involving sensory perception, signal transduction and the immune system.  Further research was done on the genetic variants of these horses by the researchers from Texas A&M University. The researchers evaluated genetic variants in quarter horses such as single nucleotide polymorphisms (SNP), copy number variants (CNV), and insertions and deletions (INDELs).

Not only do these variants help explain the uniqueness and superiority of these horses, but they have also been of use to equine breeders and veterinary medicine to improve the health and performance of these horses. For example, these variants can be used to fix HERDA, a disease in which the skin of the quarter horses is fragile and thus tears easily. So, in the spirit of the film GATTACA and the ethics of genetic engineering, what are your feelings on using these variants to enhance these quarter horses? And what about enhancing humans?