A decade ago, most scientists and bird-watchers believed that there were between 9,000 and 10,000 species of birds on the planet. A new study in 2016, however, led by the American Museum of Natural History, doubled that estimate, suggesting that there are 18,000 bird species in the world. One big step in the discovery of these unknown bird species was announced just several weeks ago, with the finding of a new species of hummingbird in Ecuador. Named Oreotrochilus cyanolaemus, or blue-throated hillstar, the species was discovered in the Andes by a multinational team of ornithologists from Ecuador, Venezuela, Denmark and Sweden. Dr. Francisco Sornoza-Molina of the Instituto Nacional de Biodiversida in Quito, Ecuador, and his colleagues first photographed the hillstar during fieldwork in the Ecuadorian highlands back in April of 2017; they would return later that spring to verify the finding.

The blue-throated hillstar is approximately 13 centimeters in length and has a slightly curved beak, which it uses to reach the flowers of the chuquiragua, an Ecuadorian plant known as the “flower of the Andes” or “flower of true love” that is used to brew tea. It has a rich, deep-blue neck and greenish-blue head and body feathers.

Ecuador is rich in biodiversity, containing 132 hummingbird species out of the more than 300 in the world, but that doesn’t make the discovery any less surprising. Hummingbird expert and researcher at the University of New Mexico, Dr. Christopher Witt,  commented, “The hillstar hummingbirds occur in the most rugged, isolated, and inaccessible parts of the Andes, where they roost in caves, forage on the ground, and spend half their lives in hypothermic torpor, so the discovery of a new species in this group is incredibly exciting.” With estimates on the number of individuals of blue-throated hillstars varying between 250 and 750, ornithologists agree that the species is in danger of extinction, with its high-altitude habitat between the provinces of Loja and El Oro near the Pacific Ocean threatened by gold-mining, fire, and grazing. Commenting on the life-threatening conditions facing the blue-throated hillstar, Dr. Sornoza-Molina of the research team said, “Complete support from national and international conservation agencies is needed in order to save this species. The action plan for the conservation of this bird is creating a network of protected areas along its geographic range.” 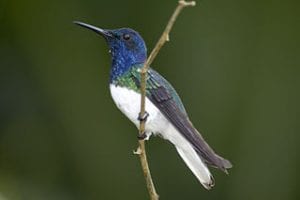 The blue-throated hillstar hummingbird (Oreotrochilus cyanolaemus) is a newly discovered species of hummingbird located in the Ecuadorian Andes.  These unique birds have several fascinating adaptations to survive at altitudes higher than 3,500 meters, where the air is thinner, temperatures are lower, and the environment is oxygen-poor.

To conserve energy, these birds don’t hover often, instead opting to hop between chuquiraga plants, using their large feet to latch on to branches while drinking pollen and eating the insects they can find.  To account for the thin air during the rare occasion that Oreotrochilus cyanolaemus take flight, they have lengthened tails and wings to provide extra lift.  During the especially cold nights in their habitat, the blue-throated hillstar will enter a state of hibernation called torpor, slowing their metabolism and allowing their heart rate to drop.

According to evolutionary biologist Elisa Bonaccorso of the Universidad San Francisco de Quito in Ecuador and her team, the blue-throated hillstar hummingbird is in grave danger; she estimates that there are only 750 individuals left in the wild.  They are spread out in groups over a 100 square kilometer area that is rapidly shrinking due to the expansion of cattle grazing and god and copper mining in this area by local communities.

At this rate, the future is not bright for this brand new species of hummingbird.  There have been no efforts at conservation thus far, but a conservation action plan is currently being designed by the town of Sabadel as part of a nature tourism initiative.

Currently, our blue-throated, Ecuadorian friends are classified as critically endangered.  I hope to keep you, the reader, updated on future conservation efforts to help save these unique birds.

For the original article on this topic, click here.

To look at Bonaccorso and her team’s study, click here.