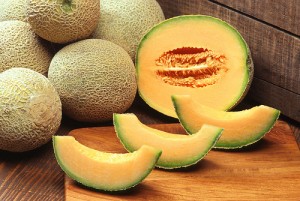 On September 30, 2011, cantaloupe has killed fourteen people and sickened seventy-six people in eighteen states.  The cause of this is listeria in Cantaloupe.

Listeria is the deadly bacteria, which can replicate inside a human cell once it penetrates the cell.  Listeria symptoms are usually unnoticeable and they only last a week and then it is spontaneously resolved. If listeria replicates and spreads to the brain, it can cause meningitis, alter mental condition, cause seizures, and death.

In Colorado, the FDA and state health authorities are working together to figure out how the cantaloupes were contaminated. They are wondering whether or not the cantaloupe had been infected with the bacteria through contaminated irrigation waters. There has been a drought in Colorado, therefore the farmers have been accessing water from all sorts of places such as animal vectors.

Cantaloupes are one of the only fruit than can cause an outbreak. Melon’s rough skin allows it to trap bacteria. The exterior of the cantaloupe provides a great site for the bacterias to attach. Once attached it can multiply and then penetrate the skin leaving someone with an infected cantaloupe.  Cantaloupes can be contaminated with the bacteria anytime during its contact with the ground, but the most likely time of contamination is during its harvesting. Animals are attracted to the ripe melons and can spread bacteria through the irrigation water.

Deaths are still accumulating and as of Wednesday, October 12 there have been 23 deaths and 116 sicknesses. Countless cantaloupe farmers have lost their jobs because of the cantaloupe retraction. Will you chance your life by eating a cantaloupe? Seriously don’t eat them…it can kill you.