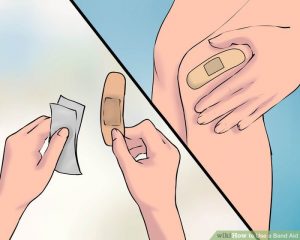 By the time you reach the age of five, you’ve probably scraped your knee more times than you can count. Now, think back to the last time you fell off your bike or stubbed your toe during the day and the last time you did the same at night. Do you remember a difference? Chances are, you weren’t paying close enough attention, but there are scientists who were, and they have come to an interesting conclusion. According to a new study from England, nighttime injuries take longer to heal than daytime injuries, 60% longer to be exact! Why? It all has to do with the biological clock and the 24-hour cycle of cardiac rhythms of skin cells. 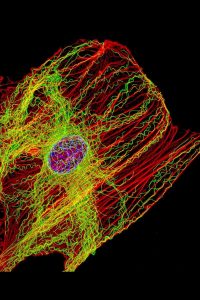 Fibroblast skin cells are found in the deepest layer of the skin called the dermis. Check out the picture on the left for a close up view! When an injury occurs, fibroblasts travel to the surface of the skin, where their job is to synthesize and build the structural support of the new skin. How fast the fibroblasts travel to the surface depends on the time of day and the biological clock. Actin, a protein that forms the supportive structure of the cytoskeleton and gives a cell its shape, is the reason behind this difference. Ned Hoyle, a molecular biology researcher, studied the changes in actin over time, and came to the following conclusion: during the daytime, actin is in the form of long filaments, while at night, actin is in globular form. Actin filaments are crucial in helping cell moves, so when actin is in globular form, it takes longer for the fibroblast cells to travel to the surface of the skin.

The team of researchers conducted experiments on mice, which exhibited the same affect they had studied previously – the healing time at night is longer than during the day. Next, the team turned to humans, studying burn patients. From hospital records, they concluded that on average, burns that occurred during the day healed within 17 days, whereas burns that occurred at nigh healed within 28 days. However, there are still a lot of unknowns. Scientists predicted that the fibroblasts would make up for lost ground during the day, but in reality, the cells wounded during daytime never catch up.

Although we can’t plan when we get hurt, this research is extremely important. Hoyle said that this research could be expanded to trying to make cells think its daytime, if a procedure takes place at night. Furthermore, he hopes to conduct more research on the complex process of healing and blood clotting. To check out their full study, click here!