Astronomers: The Next Climate Change Culprit

An article published in October 2020 on the American Association for the Advancement of Science’s website, discusses two of the six papers published in Nature Astronomy in September 2020. The papers discuss astronomers and the large amounts of carbon they emit due to their long flights to meetings and their energy-eating telescopes. These carbon emissions have added to the global warming crisis and the Greenhouse effect. The Greenhouse effect occurs when gases (most commonly Carbon dioxide, Methane, and Nitrous oxide) absorb solar radiated heat that is projected off of the earth’s surface. The trapping of this heat in the atmosphere ultimately increases the overall global temperature. Water, “the moderator of temperature”, has a high specific heat and therefore a high heat of vaporization, as it takes a large amount of energy to raise the temperature of water 1 degree Celsius. Water molecules can absorb large amounts of heat emitted within earth’s lower atmosphere, and radiate this absorbed heat out in all directions. When this heat is released, the water vapor lowers the temperature of the surface it leaves, creating a cooling effect to monitor the temperature. However, in the case of global warming, water vapor acts as a greenhouse gas.  The vapor molecules holds heat within them, and some of the heat is projected back onto the surface, further adding to the Greenhouse effect.

The first paper in Nature Astronomy discusses a study done by delegates at the 2019 European Astronomical Society (EAS) meeting in France. After sitting through a heatwave during their meeting and sweating through their shirts, the delegates decided to calculate the amount of carbon dioxide they emitted from their meeting travels. They found they produced 1.5 tons of carbon dioxide (1900 tons in total) per delegate. This is more than the average resident in India emits yearly! Besides flights, supercomputers are the next leading cause of astronomers’ carbon emissions. Another study showed that each Australian astronomer produced 37 tons of CO2 equivalent per year. 60% of those carbon emitted came from supercomputers and their energy usage.

The second paper published discusses the work of MPIA’s Faustine Cantaloupe and her colleagues that uncovered 30 years of weather records from the Paranal Observatory in Chile, operated by the European Southern Observatory (ESO). They discovered temperatures in Chile rose 1.5°C each year. This increase in temperature causes complications for Paranal’s very large telescope, which does not function past 16°C. Ironically, the carbon the astronomers are producing is hindering their ability to use their telescopes.

In hopes to combat carbon emissions from astronomers and to help decrease global temperatures, MPIA’s Knud Jahnke plans to set up supercomputers in Iceland, using the environmentally friendly geothermal energy power plants there. Geothermal power plants dig boreholes and use the steam from hot water to run power turbines, harnessing energy without carbon emissions. I recently went to the Svartsengi Geothermal Power Plant in Iceland, which uses geothermal energy to heat the famous Blue Lagoon in Iceland! After seeing the power plant in action, I think that installing more supercomputers in Iceland would prove to be very effective and could help reduce their carbon footprint immensely. 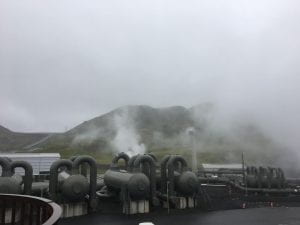 Here is a photograph of Svartsengi Geothermal Power Plant in Iceland!

This year, the European Astronomical Society meeting took place again, but this time they were virtual due to Covid-19. The team of delegates continued their studies and calculated the carbon costs for the new 2020 meeting and discovered that they emitted 582 kilograms of carbon during the entire meeting (based on computer energy usage)- about one–three-thousandth of the previous 2019 meeting in total. The EAS is currently studying a hybrid format for future meetings.

Do you think Zoom and virtual meetings could help solve the EAS’s carbon-producing problem? Comment down below!

Trash, Crops, and Even Pets are on the Menu for these Carnivores