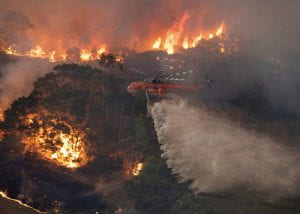 The health of our gut is essential to the everyday function of our body — our gut focuses on the breaking down, transfer and excretion of the food we eat. As such, the balance of bacteria within our gut especially when it comes to breaking down molecules. In particular, the bacteria in the lumen of our colons “ferment the carbohydrates to short chain fatty acids, which are absorbed to provide a second energy source” (Warell, Cox and Firth). Due to the importance of bacteria within the gut, research and advancement in the gut weighs heavily on our ability to interact with problems involving digestion — obesity being a prominent one.

At the Wellcome Trust Sanger Institute, 173 species of bacteria were sequenced for the first time, including 105 species that were isolated for the first time as well. It’s incredible that so many species were identified and isolated for the first time all in one institution. To those who don’t know, DNA sequencing is a process that determines the genetic details of a DNA section: in this case, the DNA sequencing helps scientists determine the genetic information of gut bacteria. This genetic information is highly useful in determining the effects of bacteria — as DNA directly affects the production of proteins, like enzymes in the gut. 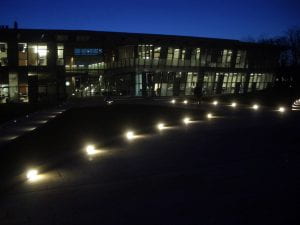 While research on the gut relied on mixed-samples of gut bacteria, this new research frees scientists to better identify and isolate each component species. The very foundation of bacteria research has shifted with so many species of bacteria finally open to more specific experimentation, and I’m so excited to see that even the basics of gut research has completely advanced. Not only does this show us the ever-changing advancement of how scientists conduct research and create experiments, but this also holds so much hope for the future: our gut holds importance within our day to day well being, and the ability to conduct much more specific experiments will open up our ability to treat different gastrointestinal disorders. 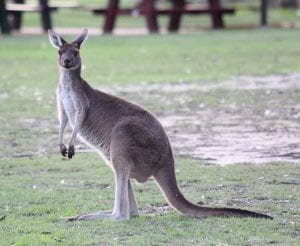 Though an area may be protected, the rapid growth of herbivores due to the decrease of predators lead to the massive imbalance of an ecosystem.

According to West Australian Environment Minister Stephen Dawson, the red kangaroo population has (insert hyperlink) increased over 345.94% from 409,422 in 2014 to 1,825,760 in 2018, and the Western Grey population has increased about 94% from 1,246,870 in 2014 to 2,423,800 in 2018 in West Australia alone. Throughout Australia, the numbers are just as gigantic: the graph below depicts the tremendous population growth over the last few years in South Australia. 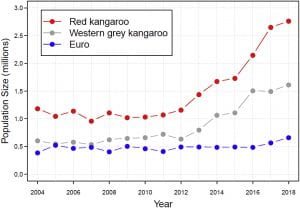 Ironically, the protected areas are finding themselves lacking the ability to properly maintain biodiversity due to the ecological imbalance of herbivores. Though they lack the threat of human clearing,  the herbivores’ rabid consumption still endanger other native species.

In addition to harming the protected areas, farmers find themselves asking “what is the best way to deal with the kangaroo problem?” According to the vice president of the Pastoralists and Graziers Association of West Australia, Digby Stretch, kangaroos should be used for pet and human consumption – thus killing two birds with one stone. Kangaroos cannot be simply fenced off farm land, and make the creation of grazing pastures and the planting of perennial species unrealistic.

Personally, the control of kangaroos seems like a necessity due to the threat it poses on other native species. Even though it may seem inhumane to kill animals of a native species, controlling the kangaroo population better allows the balance to return between the other species instead of leaving the area barren. Extinction rates are rising in Australia, and with it, the solutions must also rise and adapt. Attempting to simply protect a singular species won’t fix an issue with a whole ecosystem. Moving forward, the conservation of biodiversity needs to adapt and evolve along with the specific problems of an ecosystem.