Herpetologist, Steven Platt, set up breeding colonies in Myanmar. In 2004, they captured less then 200 tortoises from the wild and put them into three breeding colonies. This was a large enough starting population to avoid inbreeding. Today the number of tortoises they have has grown to 14,000! In 2013, about 1,000 tortoises were reintroduced into protected land. In 2016 these colonies produced over 2,000 hatchlings per year. 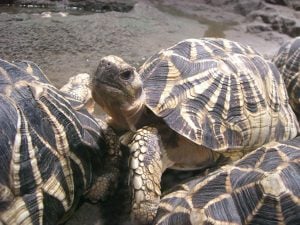 Despite the massive success of the breeding colonies there have been setbacks. At first, poachers broke into the breeding colonies to steal the tortoises. Modifications, such as 10 foot concrete walls, were installed to protect the tortoises from the thieves. After the tortoises are reintroduced into a protected area there is still the concern of poachers. However, with the success of the breeding colonies, that were started by confiscated tortoises, there is a lot of promise that this species will survive going forward. A new idea to reintroduce this species is the bury their eggs and let them hatch in nature. Dr. Platt hopes this will speed up the re-establishment of the population.

Dr. Platt recognizes that he and his team can not reintroduce the Burmese Star tortoise effectively without community support. By sharing their work with the near by community, members of it look of for illegal activity and are willing to help in any way they can. Dr. Platt’s group also gets local monasteries to bless the tortoises which supports the local theory that harming a tortoise will result in “divine retribution”.