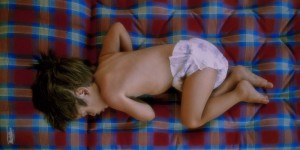 Do you get enough sleep during the week? With exams, college applications and numerous extracurricular activities, it is easy to lose track of time and stay up all night working on homework. Personally, I know that I do not get enough sleep every night. However, I did not know that the later people stay awake, the more their brains become active and overly excited.

A recent study has shown that as people stay up late during the night, their nerve cells become more jumpy the longer they are awake. The study consisted of six people staying up all night and having researchers measure their brain responses. The leader of the study, Marcello Massimini of the University of Milan, found that people’s brains become more reactive as hours awake accumulate. To test for signs of altered brain function, the researchers delivered a jolt of magnetic current to the subjects’ skulls. This stimulated an electrical response in the nerve cells. Through electrodes, the scientists measured the strength of this electrical response in the frontal cortex, the region of the brain that is involved in decision-making.

The researchers observed that after a night of sleeplessness, the subjects’ electrical responses were stronger than they were the previous day. The scientists found that this overreaction disappeared after a night’s sleep. Therefore, the study showed that during the hours people are awake, the brain accumulates connections between nerve cells as new things are learned. They think that this excitability in the brain may explain why sleep deprivation can trigger seizures and why hallucinations can accompany an all-nighter because these are events that are usually marked by extreme nerve cell excitation.

Neuroscientist Christopher Colwell of UCLA says that this is “an important finding [because] sleep deprivation is an area of huge interest because most of us do not get enough sleep.” The results from this study help clarify what goes wrong in a brain deprived of sleep. These scientists have also found that the results have a link to depression because it has been found that sleep deprivation can reverse the symptoms of depression. Massimini and his team believe that because the brain is in a boosted state of excitability when it lacks sleep, people who suffer from depression do not exhibit the same symptoms of it when they have not gotten enough sleep. However, this state of excitability is not good for the brain because it needs time to rest and repair itself. Sleep sweeps the brain of extraneous clutter, leaving behind only the most important connections. Therefore, when people are sleep deprived, their brain has so many connections between nerve cells that it does not have the ability to only pick out the most important connections. Thus, this state of excitability is not good for the brain because the brain is never given a break. After learning this, I will definitely try to adjust my sleeping schedule so my brain does not overwork itself!

To learn more about the effects of sleep deprivation on the brain and behavior click on the link below!  http://serendip.brynmawr.edu/exchange/node/1690

Oh, hey there Stress -.- Here to cause some more damage?