As humans, we have recognized that regular exercise has many benefits for everyday life. It helps our physique, our muscle and bone health, and it also is responsible for the release of endorphins that improve our mood. However, exercise is time consuming, and some of us just lack the motivation for regular physical exertion.  Scientists at Michigan Medicine have been researching the protein Sestrin in mice and flies, and they have found that “it can mimic many of exercise’s effects,” potentially creating a way to gain the benefits of exercise without actual exertion.

In their experiment, the Michigan scientists used two groups of flies. One group of flies was deprived os Sestrin, while the other group’s Sestrin levels were enhanced. When put through an extended period of exercise, the flies that lack Sestrin did not have any of the typical muscle development and endurance that comes from working out. The flies that received amplified amounts of Sestrin also didn’t progress. However, the Sestrin-boosted flies didn’t receive the benefits of exercise from exertion, because they had already acquired those benefits  from their increased Sestrin levels. In performing the same experiment with mice, “Mice without Sestrin lacked the improved aerobic capacity, improved respiration and fat burning typically associated with exercise.” According to the nature.com article “Sestrins are evolutionary conserved mediators of exercise benefits,” “in vertebrates, endurance training leads to increased mitochondrial biogenesis/efficiency, decreased triglyceride storage, improved insulin sensitivity, and protection of both muscle and neural functions.” Basically, if Sestrin indeed proves to be the magic exercise replacement, it could help alleviate some of the negative physical consequences of aging. 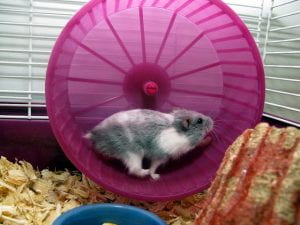 A mouse in a stereotypical wheel. This is one way the Michigan scientists could measure the mice’s physical activity in a controlled setting.

However, our scientists have 2 main problems in turning Sestrin to a mass produced supplement: it’s a very large molecule, and we are still unsure of how the body naturally produces sestrin during exercise. Therefore, we are not yet at a point where our exercise replacement is a reality, but the probability of future promising results is high.

Personally, I will have to see this protein work on humans before I take seriously the idea of an exercise replacement. A successful Sestrin supplement may be able to mimic the physical benefits exercise, but obtaining physical results through minimal work could be detrimental to the public’s general mentality. Receiving physical benefits through hard exercise teaches cause and effect, mental toughness,  the value of goals, and the satisfaction of well deserved rewards. If this supplement ends up being the fantasized work out supplement everyone is looking for, how will that result-without-the-work mentality impact how we treat other aspects of society? That’s why I don’t see this discovery as a total positive, but I’m excited to see what future studies bring in the development of this long fantasized product.

If you have anything other information or opinions on this topic, feel free to drop a comment below!

Pull-Ups, Biology, and Our Sexist Society

Men and women are different, right? Guys have more testosterone, which leads to greater muscle mass, facial hair, deeper voice, and greater height. Women have more estrogen, which leads to the development of characteristics like wider hips, and breast development. Having less testosterone means it is harder to gain strength, but not impossible. Anyone can, with the proper training regimen  increase their strength, regardless of sex. This, however, goes against what New York Times writer Tara Parker-Pope writes in her article Why Women Can’t Do Pull-Ups. In it, she cites a study in which

Three days a week for three months, the women focused on exercises that would strengthen the biceps and the latissimus dorsi — the large back muscle that is activated during the exercise. They lifted weights and used an incline to practice a modified pull-up, raising themselves up to a bar, over and over, in hopes of strengthening the muscles they would use to perform the real thing. They also focused on aerobic training to lower body fat.

According to the study, only four of the seventeen women were able to do one pull-up at the end of the study. I, along with several hundreds of people who have posted angry comments on this article, have several issues with this study, and with the title of the article.

First, they focused on exercises that would strengthen the biceps and latissimus dorsi. My question is, what about the deltoids and trapezius muscles, and the core muscles in the abdomen, and grip strength? All of these come into play to some extent in a pull-up.

Second, I know from personal experience that using an incline to work your way up to pull-ups, often called a supine row, does not work.  I tried this for months and still could not do a pull-up. What did work was jumping over the bar and lower myself slowly (this is called negatives), and using resistance bands to hold whatever weight I could not support while doing a full pull-up. Now, I can do pull-ups. And, when you really think about it, a supine row uses the same muscles but the movement is in no way similar, so it doesn’t make sense to see it as a “toned-down” pull-up for beginners. 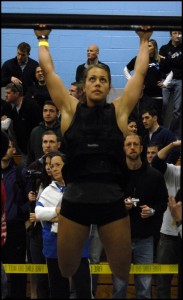 Third, how in shape were these women? This was not made clear in the article, and obviously, even after six months to a year, a morbidly obese woman may not be able to do a pull-up.  I think the issue with the study and the article comes down to two things: bad journalism and bad science.  When a 17 year old AP Biology student is able to poke a bunch of holes in your argument and find a bunch of flaws in your experimental procedure, the competence of the individuals involved comes into serious question.

So, readers, can YOU do a pull-up? Do you know any females that can do pull-ups? And, if you were to run the experiment, what would you do differently?