To Smell or Not to Smell?: The Dangers of Covid-19 on your Senses

At first there was a lot of confusion as to why the virus affected our taste and smell. Some scientists thought signs of anosmia meant Covid-19 had entered the brain through the nose. This then damages the olfactory sensory neurons (sensory neurons in the nose) causing lasting damage to the brain. However, with more research and data this fortunately doesn’t seem to be the case. Experts at the Harvard Medical School have been conducting research on this topic and have come up with a possible reason why people have been experiencing anosmia.  To understand how the virus affects people, you first need to know how the virus enters the body. The virus enters the body through a process called receptor-mediated endocytosis. The virus enters the body through the nose and mouth then binds to a certain receptor called the ACE2 receptor protein found in many parts of the body, such as the lungs, liver and kidney. After binding to the receptor the virus enters the cell and releases its own genetic material that gets copied to produce more of it as well as more viruses to spread to the whole body. The researchers at the Harvard Medical School have found that olfactory sensory neurons don’t contain the ACE2 receptor protein, so there isn’t a way that the virus could enter through those cells. Instead they believe the virus affects nonneuronal cells that support the olfactory sensory neurons, such as basal cells and sustentacular cells found in the olfactory epithelium. The virus affecting these cells is what might be causing the loss of smell due to the sensory neurons not being able to function properly without it’s normal support.  There is a lot less known about why the loss there is a loss of taste as well, since taste receptor cells also don’t contain the ACE2 receptor protein. There is still a lot of speculation and a lot more research needed to be done.  However this is good progress and some insight as to how this virus is affecting the senses.

As stated before most Covid-19 cases people get their sense of taste and smell back, but what happens if your fully recovered and your senses still haven’t returned? In one severe case a teen named Kenny Mayfield caught the virus and has yet to get his senses back. In March, when little was known about the virus, Kenny had been suffering through Covid-19, but wasn’t sure due to lack of testing and knowledge available during that time. After several months when he tested positive for antibodies he was certain that was the case. Although he was no longer suffering from the virus itself, he still had to face the consequences of it, his sense of smell had not returned. Now months later he is still trying to regain his sense of smell. He practices scent retraining to get back his senses, but the process could take 6 months to a year for it to get back to normal. He is able to taste, but without his scent it has become less enjoyable to him, causing him to lose his appetite and lose weight. There have been several other cases just like this one. A man named Eian Kantor has gone 7 month without his senses and is desperately trying to get them back to no avail. Another woman named Freya Sawbridge has begun to regain her sense of taste and smell, but claims everything is warped and unpleasant. Not only with food, these loss of senses can be incredibly dangerous if you can’t smell a gas leak or a fire.  Covid-19 can have a serious effect on your sense of taste and smell and should be taken much more seriously. 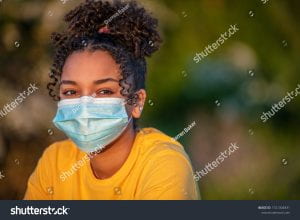 Protect your senses, and everyone around you, by staying safe and wearing a mask!

The most important thing you can take from this article is awareness. Although it is known that you lose your sense of taste and smell due to Covid- 19, I picked this specific topic because I’ve been very curious about why and how this occurs. I wanted to know more information on it.  Many people shrug off the symptom of loss and taste and smell, because they feel guaranteed that they will get it back. However, like these cases described, it is not always a definite guarantee things will go back to normal. You could end up never getting your senses back or have them return very altered. That is why it is essential to stay safe and keep yourself and others protected. Don’t take the risk, because you could be the one person to experience long term damage that could change your life forever.

A New York Times article has just reported a new “mutant superpower.” In Iceland, a brand new genetic trait was discovered, in which 2% of the population can’t smell the stinky odor of fish.

A study of 11,326 Icelanders was conducted, in which each participant was given six “Sniffin’ Sticks (pens imbued with synthetic odors)” of cinnamon, peppermint, banana, licorice, lemon, and fish. The participants were then asked to identify the odors based on how strong each smell was and how good each Sniffin’ Stick smelled. Across the majority, the fish was rated the lowest in pleasantness. However, a small group of people actually enjoyed the scent, noting that it smelled like caramel or even a rose.

This small group of participants was discovered to have a genetic mutation that enables the TAAR5 gene to form. TAAR5 (Trace Amine Associated Receptor 5) aids in making proteins that recognize trimethylamine (TMA), a chemical found in rotten and fermented fish, and some bodily fluids, including sweat and urine.  TAAR5 is also a G Protein, meaning that it binds guanine nucleotides. And, like other coding proteins, TAAR5 is a quaternary structured protein that has three subunits. Because this protein is incapable of binding guanine nucleotides, it means that there will be at least one “broken” copy of the gene that codes for the inability to smell fish.

To simplify: TAAR5 recognizes the chemical of smell in fish (TMA), however, with the mutation that prevents the TAAR5 from forming, the smell of fish (TMA) is unrecognizable. 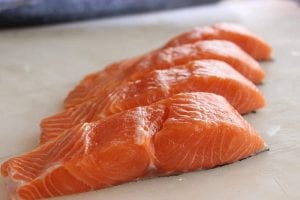 Interestingly, research has shown that this mutation may be a reaction to the customs of Iceland and a possible next step in the evolution of the region. In Iceland, fish takes a prominent place on most menus including dishes like “rotten shark.” These cultural and possibly smelly dishes may explain why this mutation is much more prominent in Iceland compared to Sweden, Southern Europe, and Africa (where the study was repeated). Bettina Malnic, an olfaction expert at the University of Sao Paulo in Brazil, commented on the luck of the region study took place, saying, “if they hadn’t looked at this population, they might not have found the variant [of TAAR5].”

I am VERY sensitive to smell and, at the same time, a lover of sushi, so it definitely fascinates me that there are people out there who don’t have to deal with the odor of smelly fish. This mutation is definitely one I wish I obtained. What do you think about this? Do you think you could have this mutation?! We humans can see and hear in stereo. This is what leads to our 3D vision and allows us to find things easily because of our depth perception. Similarly our ability to hear in stereo allows us to roughly locate where a sound is coming from and how far away it is. But humans can’t smell in stereo, and it was widely believed that no mammal could naturally. That is until a study came out which indicates that the eastern mole, which is nearly blind, locates it’s food with the help of stereo smell.

Kenneth Catania, who led the research, said he came into it as a skeptic. “I thought the moles’ nostrils were too close together to effectively detect odor gradients.” Catania’s interest began when he found that the eastern mole could locate food just as quickly as its cousin, the star-nosed mole, which has a far superior sense of touch. In further tests he found that the eastern mole was remarkably quick at locating food placed in a radial chamber, indicating that they had a very sensitive sense of smell. In addition, Catania found that when he covered a mole’s right nostril, it veered to the left consistently, and when he covered the left nostril, it veered to the left consistently. This discovery is what indicated that the moles had stereo smell. Catania says this discovery “suggests other mammals that rely heavily on their sense of smell, like dogs and pigs might also have this ability”