Avenging Lamarck: The Epigenetics of a Fish

The laughingstock of biology classrooms everywhere, the footnote to Charles Darwin and his widely acclaimed theory of natural selection, the scientist who has caused many a biology student to stop and wonder why he or she should even know his name, Jean Baptiste Lamarck has gotten a bad rap among student’s across the country. Predicting that evolution in species resulted from individual species adapting to their environment and morphing their bodies to better survive and reproduce, passing their adapted traits to their offspring, Lamarck has been criticized by students everywhere for simply not being correct. However, he wasn’t entirely wrong. Recent research conducted in the Gulf of St. Lawerence off the Labrador Peninsula has revealed that skate fish  in the area have developed differences in terms of size from other skate fish because individual organisms are able to turn on and off select genes. 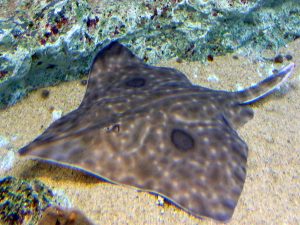 The ability to turn on and off certain genes in organisms based on environmental conditions and pass those changes to offspring is called epigenetics. Epigenetics allows individual organisms to change their traits slightly to adapt to their environment. Where evolution by natural selection takes millions of years and results in the evolution of populations on a macro scale rather than individual organisms, epigenetic changes are much quicker.

Researchers were attracted to studying the winter skate fish in this bay because though the fish lies all along the North American coast, in this bay, the fish tends to be significantly smaller than other members of its species. Scientists attribute this to the warm water in this shallow water area which makes smaller organisms more likely to survive and reproduce.

However, DNA tests showed that significant changes in the genome of the fish weren’t what made them smaller, indicating it wasn’t Darwinian natural selection that dominated this process. The researchers discovered that the fish could turn on and off certain pieces of DNA in individual organisms to better adapt to the environment. Thus, the fish are able to adapt more quickly to changes in temperature than other organisms that rely solely on natural selection for changes to their traits.

The researchers hope this new information will help with conservation efforts and will give more insight into how species adapt to climate change.

So, do we owe Lamarck an apology? How can conservationists use this information to draw more interest to their goal?