A Step in the Right Direction: Advancement in Robotics Leading to Better Prosthetics 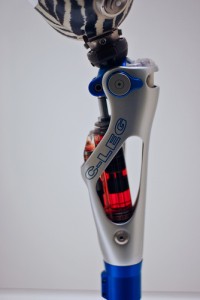 New strides in robotics technology have made it possible to create new types of prosthetics, which can function more naturally than a passive artificial leg. The H. Fort Flowers Professor of Mechanical Engineering at Vanderbilt University, Michael Goldfarb and his colleagues at the Vanderbilt’s Center for Intelligent Mechatronics are the leaders in lower-limb prosthetic research and have expressed their views on robotic prosthetics in an article in Science Translational Medicine‘s November issue. Goldfarb’s team developed the first robotic prosthesis, which included a powered knee and ankle joints. Their design became the first artificial leg controlled by thought after researchers at the Rehabilitation Institute of Chicago added a neural interface to it.

Technological advances, such as lithium-ion batteries, powerful brushless electric motors with rare-Earth magnets, and miniaturized sensors built into semiconductor chips, have allowed for new developments in robotic prosthetics. The electric motors, whose batteries store a single charge with enough power to last a full day, serve as the “muscles” of the prosthetic. The sensors function as its “nerves” like those in the peripheral nervous system by providing information like the angle between the thigh and lower leg and the force exerted on the bottom of the foot. The microprocessor acts as the central nervous system by providing coordination.

In order to recognize a user’s intent to do different activities, there must be and effective control system that provides some type of connection with the central nervous system. There are many different methods available, but it is still undecided which of these is best. The least invasive approach uses physical sensors to differentiate between the user’s intentions and his or her body language. Electromyography interface is a different approach that places electrodes within the user’s leg muscles. The most invasive techniques entail electrode implants inside the user’s peripheral nerves or directly into his or her brain.

Bionic legs seem to provide many possible advantages over passive artificial legs. Lower-limb prostheses with a powered knee and heel joints have demonstrated faster walking speed and decreased hip effort while using less energy. Robotic prosthesis could also decrease the rate of falls leading to hospitalization due to the leg’s natural movement, improved compensation for uneven ground, and ability to help users recover from stumbling. Despite their benefits, robotic legs face some issues before being launched in the United States. These challenges include approval from the United States Food and Drug Administration (FDA) and additional robotics training for clinicians prescribing these types of prostheses.

In spite of these challenges, this new development of robotic legs will surely prove beneficial to amputees across the country. Is there a more efficient way to help the public gain access to this type of technology? What can be learned from these new advances?