Summary of the Krebs Cycle:

In AP Biology, we are currently learning about how the Krebs cycle (also known as the citric acid cycle) is one of the most important metabolic pathways for sustaining eukaryotic life and generating ATP.

In the matrix of the mitochondria, the citric acid cycle begins by the acetyl group from acetyl CoA attaching to an oxaloacetate molecule to form a citrate molecule. Citrate is then oxidized and in the process, releases two carbon dioxide molecules for each acetyl group used in the cycle. Three NAD+ molecules are converted to NADH, one FAD molecule is converted to FADH2, and a single ATP molecule is created. This pathway should occur a second time, as the oxidation of every two pyruvates creates two acetyl CoA, which begins the Krebs cycle. 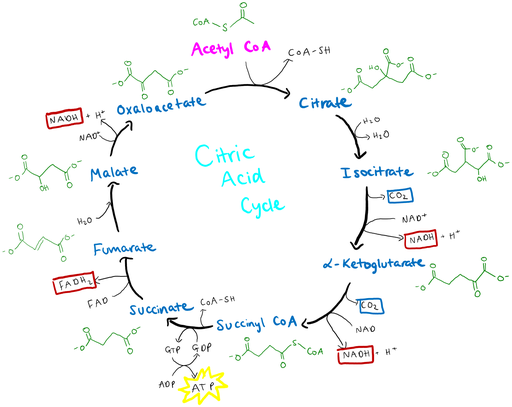 There’s a “Reverse” to the Krebs Cycle Now?

In the absence of oxygen, some bacteria can perform the “reverse” of the Krebs cycle. This process results in the construction of biomass within bacteria that perform this process.

A key distinction between the citric acid cycle and the “reversed’ citric acid cycle, is that citrate synthase normally found in the Krebs cycle is replaced by ATP-citrate lyase in the “reversed” process. This is crucial because ATP-citrate lyase consumes ATP to split citrate instead of forming it. Another variation of this process requires no energy and has stumped researchers as to why organisms often utilize the energy costing pathway instead of the “easier” pathway to acquire biomass.

Researchers at the University of Münster decided to investigate potential factors that trigger this “easier” pathway in two kinds of anaerobic bacteria: Hippea maritima and Desulfurella acetivorans. These organisms thrive in oxygenless hot springs, with a carbon dioxide concentration of over 90 percent in their environment.

The team later found that the bacteria’s unique habitat proved to be an important factor responsible for the growth of the organisms’ biomass. After cultivating the bacteria under a diverse range of conditions, the research team discovered that the high concentration of carbon dioxide is responsible for enabling the “reversed” citric acid cycle in both anaerobic bacteria.

“It was mysterious why this ‘expensive’ version of the pathway exists if an energetically much cheaper alternative through the backwards reaction of citrate synthase is feasible. Now we know that this is due to the low carbon dioxide concentrations in many environments. The cheap alternative doesn’t work there.” researcher Wolfgang Eisenreich says.

What the Emphasis on the Concentration of Carbon Dioxide Means for this Pathway:

Do you believe they have truly discovered an ancient metabolic pathway? Or do you think these bacteria adapted to function this way?

Would you think that this process would be highly conserved in evolution if the carbon dioxide levels in the atmosphere didn’t dip?