CRISPR (Clustered Regularly Interspaced Short Palindromic Repeats) technology’s origin stems from a 1987 discovery of specific genetic sequences inside the genome of Escherichia Coli; however, it wasn’t until 2007 which introduced practical usages of CRISPR. While CRISPR is seemingly a natural phenomenon, scientists quickly acknowledged its potential and began researching practical usages of it. Scientists discovered that certain bacteria, such as E. Coli, use CRISPR as an antiviral mechanism. CRISPR’s capabilities intrigue scientists because it offers a different

approach that is more precise, quicker, and cheaper for altering an organism’s genome to better suit it for survival. Whether CRISPR is being used to treat genetic mutations that lead to cancer or drought-resistant plants, CRISPR’s applications can be applied nearly anywhere on the genetic level. CRISPR-Cas9 works by combining a protein that can snip DNA strands with a molecule that guides it to the site of concern. “When bacteria survive a viral attack, they incorporate snippets of the virus’s DNA into their genomes. Those stolen segments are called ‘CRISPR.’ If the virus attacks again, the bacteria use those CRISPR segments as a template to create strands of RNA that home in on the corresponding sequence in the virus’s genome. The CRISPR RNA carries along a protein called Cas9 to the target location on the DNA. The protein disarms the virus by cutting its DNA at that spot” (c&en.org).

One particular area of concern where CRISPR technology may provide some aid is the p53 and associated genes. According to Cancer.gov, the “p53 gene makes a protein found inside the nucleus of cells and plays a key role in controlling cell division and cell death. Mutations (changes) in the p53 gene may cause cancer cells to grow and spread in the body” (Cancer.gov).

Cells that have this mutated p53 gene lack the ability to control cell division and death. We’ve learned in AP Biology that the interphase cells go through before undergoing mitosis, and cytokinesis is extremely important to ensure that they divide and grow properly. But if something goes wrong during G1, S, or G2, that could lead to uncontrolled cell growth and division and cancer. Targeting p53 using CRISPR technology has some limitations, though. CRISPR is much less effective against p53 that is active, but both inactivated and mutated p53 allow for uncontrolled growth, leading to cancer. So, the scientists at Karolinska Institute propose that p53 inhibition is the most effective way to manipulate p53 to be better suited for CRISPR treatments. Preventing further mutation of p53 became the key concern because this leads to extra complexities and danger to associated genes.

Preventing similar genes from DNA damage is key to preventing uncontrolled cell growth. The researchers “identified a network of linked genes with mutations that have a similar effect to p53 mutations, and shown that the transient inhibition of p53 is a possible pharmaceutical strategy for preventing the enrichment of cells with such mutations” (Karolinska Institute). Furthermore, the scientists studied the DNA damage response as a possible answer in developing a more accurate guide to RNA sequences, which are used to guide CRISPR where a DNA sequence requires editing. The scientists claim that “We believe that the up-regulation of genes involved in the DNA damage response can be a sensitive marker for how much unspecific (‘off-target’) activity a guide RNA has, and can thus help in the selection of ‘safer’ guide RNAs.”

Cancer has been a seemingly unsolvable problem for generations. Any step taken to further our capabilities for handling cancer is a good step, and eventually, we will reach a point where cancer is hopefully a disease of the past. Utilizing CRISPR to its fullest potential will take time, but scientists are hopeful that it will be an absolute game-changer in the fight against cancer and other genetic diseases.

The ground-breaking scientific break through of gene editing is finally here with the technique called CRISPR. CRISPR, or gene cutting, is the method of cutting a strand of DNA and letting the DNA repairer function repair the cut by itself. But it is at this instant where scientists introduce some changes to the genes, which the DNA will reproduce; DNA naturally grows back the mutated Genes. This CRISPR sounds great in the world of science, where certain genes can be modified onto a person. Though there are different opinions on gene-modifying, CRISPR has yet to be fully perfected. One of these hurdles is P53; a tumor suppressing protein. P53 is known as the “guardian of the genome” as this protein determines “whether the DNA will be repaired or the damaged cell will self-destruct” (MEDICINEPLUS). While this is good news, it is observed that “a dataset of >800 human cancer cell lines identified additional factors influencing the enrichment of p53-mutated cells.”(aacrjournals). So a lot of cancer cells have had a mutated P53 protein. So why does this happen? Why is the guardian of the genome being mutated?

P53 mutations are “missense mutations,” meaning they mutate in relation to a gene being edited, which creates different amino acids. By creating a whole new set of amino acids, the cell completely changes and in this case, mutates the P53. By mutating the P53 protein, P53 can no longer stop the cell division cycle, immensely increasing the chance of cancer cells. Although I make CRISPR sound like a dangerous operation to do(*I am not a scientist*), Researchers at Karolinska Institutet say to” have found new links between CRISPR, p53 and other cancer genes that could prevent the accumulation of mutated cells without compromising the gene scissors’ effectiveness.”

Another new research point mentions that although a lot of P53 mutations occur when subject to CRISPR, “cells with mutations are there from the start.” This is still a huge unknown to scientists, as CRISPR does cause P53 to mutate, there are already mutated P53 cells beforehand. Though this does prove that P53 is affected by other factors instead of only affected by CRISPR. Scientists still have much to uncover about gene-editing and in the future, they could possibly change somebody’s genes for a good cause.

In a study conducted at Karolinska Institutet in Sweden, researchers looked into CRISPR gene editing and how that can play a critical role in mutated cancer cells as well as the medical field. CRISPR is “programmed to target specific stretches of genetic coding and to edit DNA at the precise location;” specifically, the CRISPR system binds to the DNA and cuts it, therefore, shutting the targeted gene off. Researchers can also permanently alter genes in living cells and organisms, and in the future, using this method they may even be used to treat genetic causes of diseases. Although CRISPR sounds amazing, will it really be as great as it seems?

There are a few obstacles that need to be overcome before CRISPR can even become regularly administered in hospitals. The first is to understand how cells will behave once they are subjected to DNA damage which is caused by CRISPR in a controlled manner. When cells are damaged they activate a protein called p53 which has negative and positive effects on the procedure. The technique is less effective when p53 is activated, however, when p53 is not activated cells can grow uncontrollably and become cancerous. Cells, where p53 is not activated, have a higher survival rate when subjected to CRISPR and because of this can accumulate in mixed cell populations. Researchers have also found a network of linked genes that have a similar effect to p53 mutations, so inhibiting p53 also prevents these cells from mutating.

Long Jiang, a doctoral student at the Department of Medicine at Karolinska Institutet, says that “it can be contrary to inhibit p53 in a CRISPR context. However, some literature supports the idea that p53 inhibition can make CRISPR more effective.” By doing this it can also counteract the replication of cells with mutations in p53 as well as genes that are associated with the mutations. This research established a network of possible genes that should be carefully controlled for mutations during CRISPR. This will hopefully allow for mutations to be regulated and contained more efficiently.

DNA, or deoxyribonucleic acid, is a long molecule that contains a genetic code; “like a recipe book it holds all the instructions for making the proteins in our bodies.” Most DNA is found in the nucleus of the cell, but a small amount can also be found in the mitochondria. DNA is a key part of reproduction because genetic heredity comes from the passing down of DNA from parents to offspring. Altering this DNA can have an impact on a number of someone’s physical characteristics. CRISPR does just that. It can be used to edit genes by finding a specific piece of DNA inside a cell and then modifying it. Since CRISPR is so new, it has its positives and negatives, but overall it is a groundbreaking discovery. 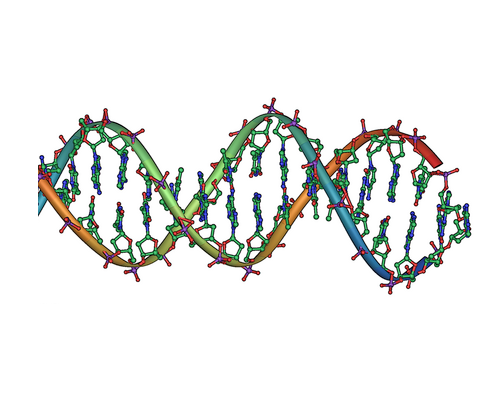 In conclusion, even though cells seem to gain p53 mutations from CRISPR, it has been discovered that most of the cell mutations were there from the start. Even though this is still an issue, we don’t know to what extent it can cause greater harm, so it will be exciting to see the new discoveries in the future!

How the “guardian of the genome” falls: 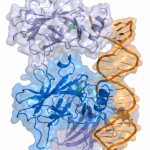 p53 is a protein that plays a vital role in the G2 checkpoint phase before mitosis begins. This checkpoint “ serves to prevent the cell from entering mitosis (M-phase) with genomic DNA damage.” (http://www.cellsignal.com/reference/pathway/Cell_Cycle_G2M_DNA.html) The role of p53 is to trigger repair for damaged DNA if possible and to hold the cell in the G1/S checkpoint until it is repaired and if the repair of the DNA is not possible p53 triggers apoptosis. Therefore, p53 plays a large role is preventing cancer because a cancerous cell starts with a mutation in DNA.  However mutant p53 allows cells who have DNA damage and have “tranformed” to be cancerous to enter into M-phase and proliferate thus forming a tumor.

Biologists, chemists and computer scientists at UC bolder however have discovered a “an elusive binging pocket” in the quaternary structure of p53 which is open “5 percent of the time.” (http://www.sciencedaily.com/releases/2013/01/130131121312.htm) The reason the pocket is only open 5 percent of the time is because the p53 protein undulates, meaning it sways so this pocket was hard to find and target. Their team then screened almost 2,500 molecules and tested out 45 molecules to see if any of them could fit into this pocket and trigger the normal tumor-suppressing abilities found in p53 in a mutated p53 molecule. They found that stictic acid fit and triggered the tumor-suppressing abilities. Although stictic acid is not able to be used as a drug, they can now scan other molecules that have similar properties as stictic acid making this a large step in cancer research because mutated p53 is found in over 40 percent of diagnosed cancer cases. (http://www.sciencedaily.com/releases/2013/01/130131121312.htm)