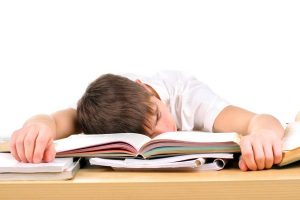 The next time you decide to stay up at night to play video games or to watch Netflix, you might want to think twice!

Having enough sleep is essential to living a productive and healthy life. Without it, you will suffer in many ways. Sleep does not only make your body tired, but it also makes your brain cells tired. Sleep deprivation slows down brain function, which can result in mental lapses and loss of memory. Lack of sleep will cause the body’s neurons to slow down and not function as they should.

A study done by Dr. Itzhak Fried, professor of neurosurgery at UCLA, showed just how harmful sleep deprivation is.

To study the effects of deprivation, Fried recruited 12 patients with epilepsy, who already had electrodes implanted in their brains from a surgery unrelated to this study. These electrodes gave researchers access to their individual brain cells.

The people in the study stayed up for an entire night. During this time, the researchers measured the participants’ brain activity as they performed different tasks. For example, the patients were asked to categorize various images of faces, places and animals as fast as possible. Each image created a unique pattern of electrical activity in the brain.  Specifically, the researchers focused on cell activity in the temporal lobe, which regulates visual perception and memory.

The researchers found that as the patients stayed up longer, they became more tired, and it became more challenging for them to categorize the images. Their brain cells were clearly beginning to slow down.

The results also showed that the people staying up all night were going through mental lapses because sleep deprivation affected different parts of the brain. For all of these people, parts of their brains were turned off even though the other parts were fully functional.

Fried’s research, in addition to other studies, proves that sleep deprivation is similar to being drunk. Insufficient sleep exerts a similar influence on our brains as drinking too much. Lack of sleep can prohibit people from doing many things such as driving safely. People who are tired are not as alert and cannot react and adapt to their surrounding environment. Kids cannot focus in school and participate in extracurricular activities without enough sleep. Kids will be putting their education at risk if they do not sleep.

Is the extra hour of Netflix really worth it? Absolutely…NOT.

Sleep is one thing that should never be sacrificed.