Recent evidence from the University of Minnesota in conjunction with the Somali, Latino, and Hmong Partnership for Health and Wellness suggested that immigrants and refugees moving to the United States were likely to experience a rapid change in their gut microbes. Described as “westernizing” to their environment, immigrants tended to lose their diverse, native microbes in favor of microbes that are common to European Americans.

The participants of this study originated from Southeast Asia, specifically the ethnic minorities of Hmong and Karen from China, Burma, and Thailand. The study used ethnic minority communities from both Southeast Asia as well as those living in Minnesota as a comparison, analyzing the gut microbes in these participants and using Caucasian American people as controls. The researchers also looked into the first generation children of these immigrants. Additionally, the study was able to follow a group of nineteen Karen refugees, tracking the changes in their gut microbes as they traveled to the United States.

The study discovered that the gut microbes in these participants changed rapidly. Particularly, in the group of Karen refugees, the Western strain of Bacteriodes replaced the non-Western strain of Prevotella in the matter of less than a year. Furthermore, the overall gut microbe diversity continued to decrease in all participants in the United States in relation to the length of their stay. Likewise, the children of immigrants had a more profound decrease in diversity. Researchers in this study suggested that this decrease in microbe diversity may have been a result of a Western diet, or for the children, growing up in the United States.

So why does this matter? Well, the study established a correlation: the greater the “westernization” of gut microbes, the greater obesity in immigrants. This obesity problem appeared to be more prevalent in immigrants, and the study had discovered a key piece of evidence for why.

“When you move to a new country, you pick up a new microbiome.” Dan Knights, one of the key authors of the study as well as a quantitative biologist at the University of Minnesota, says. “…What enzymes they carry…may affect the kinds of food you can digest and how your diet affects your health. This may not be a bad thing, but we do see that Westernization of the microbiome is associated with obesity in immigrants.” 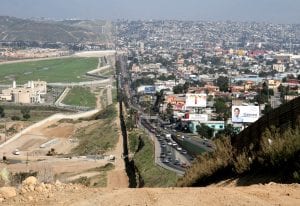 Each human has our own microbiome; one that is unique to us. However, recent research has shown that the microbiome of someone’s body is not static, but highly subject to alteration. Microbiomes change depending on the atmosphere you are in- and they change very quickly, taking only nine months in the U.S. The University of Minnesota has found that, in people emigrating to the US, microbiomes “rapidly westernize”; aka, their native microbes are replaced with new ones. However, this shift in microbes is not equal- there aren’t enough new microbes to replace the old, resulting in a harsh decline in diversity; diversity that stimulates metabolism, digestion, and immune system development.

Dan Knights, a computational microbiologist at the University of Minnesota, states that in moving to another country, you pick up new microbes native to that country, and new disease risks as well. In this case, the shift in the microbiome makeup can be beneficial, as the new microbes may aid in defense against new disease. However, it has also been found that “Obesity rates among many of the study immigrants increased sixfold. Those who became obese also lost an additional 10 percent of their diversity.” This fact links diet shifts to microbiome shifts, yet Knights states that “diet alone wasn’t enough to explain the rapid Westernization of the microbiome,” and that other things such as water and antibiotic use factor in as well. However, diet is still an important part in microbiome health and diversity. Knights studied microbiota of Hmong and Karen women who had immigrated to the U.S., these immigrants’ American-born children, and white American controls. Their microbiomes shifted to Prevotella to Bacteroides, coming to resemble those of the white Americans who acted as the control. The immigrants’ children were even more susceptible to changes in and loss of microbial diversity. 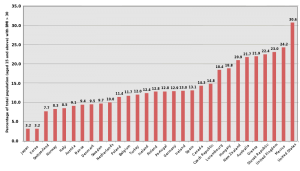 Obesity statistics worldwide from the years 1996-2003.

We as Americans are highly aware of our obesity epidemic and are doing all we can to find a way to fix it. Research that links it to a cause relieves people- it provides hope that there is a way to change it. Knights remarks that “we do see that Westernization of the microbiome is associated with obesity in immigrants, so this could an interesting avenue for future research into treatment of obesity, both in immigrants and potentially in the broader population.” However, it cannot be used as an excuse for our problem as Americans- it is simply a breakthrough in a long journey that may help us in the long run.