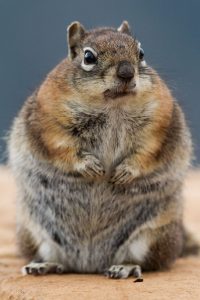 As we enter the heart of winter, puffy coats, hats, and gloves make it out of our closets to protect us from the frigid air. While we trudge along shivering, the ground squirrel lives happily in the cold weather, resistant to the low temperatures.

A new study shows that when the ground squirrel wakes from hibernation, it is less sensitive to the cold than its non-hibernating relatives. Why? A cold-sensing protein, TRPM8, in the sensory nerve cells is partly responsible for the amazing phenomenon.

Part of the squirrel’s and hamster’s intolerance to cold has to do with the TRPM8 protein. TRPM8 is a cold-sensing protein that sends a signal to the brain when something is too cold. Researchers turned to the gene responsible for turning on the TRPM8 protein to find the differences between a ground squirrel and a rat. They found a chain of six amino acids in the squirrel gene that caused the adaptation to cold. When they switched that section with one from a rat, the squirrel was more sensitive to the cold.

It is quite amazing that scientists can extract and switch such small portions of DNA to find the exact cause of a trait. What else do you think this technology could be used for?

The Effect on Life:

Tolerance to cold may help the squirrel and hamster transition from an awake state to hibernation state. This is true because if an animal senses or feels cold, it will expend a lot of energy trying to warm itself up. This process counters they physiological changes needed to transition into hibernation, a state of low metabolic activity. Hence, since the hamster and squirrel don’t sense the cold, it will be easier to hibernate.

There is still a lot unknown about the TRPM8 protein and ground squirrel temperature sensitivities. It is believed that TRPM8 is only a part of their intolerance to cold. Furthermore, the structure and function of TRPM8 is still being studied and could lead to more breakthroughs. Want to learn more about ground squirrels, hibernation, or the TRPM8 protein? Click here to read the full article!