Are Genes Inherited from Neanderthals Protecting People Against COVID-19?

Neanderthals, from roughly 40,000 years ago, have had an impact on protecting people, that contain a specific haplotype on chromosome 12, from having severe symptoms due to the Sars-COV-2 virus. Researchers conducted a study that showed a ~22% decrease in severe illness connected to a gene inherited from Neanderthals.

Neanderthals evolved in western Eurasia -the largest continental area consisting of Europe and Asia- about half a million years ago, living mostly separated from early modern humans in Africa. Neanderthals likely developed certain genes allowing them to fight off infectious diseases during the time of their existence. Due to natural selection, which is when animals with the most favorable traits for survival will survive to reproduce and pass on their genes, these neanderthals were able to evolve and pass on the favorable gene allowing modern humans today to fight off Sars-Cov-2. Through natural selection, the haplotype, on chromosome 12, linked to protection against certain viruses has been passed on. This specific haplotype has helped people during the current pandemic to stay out of the ho 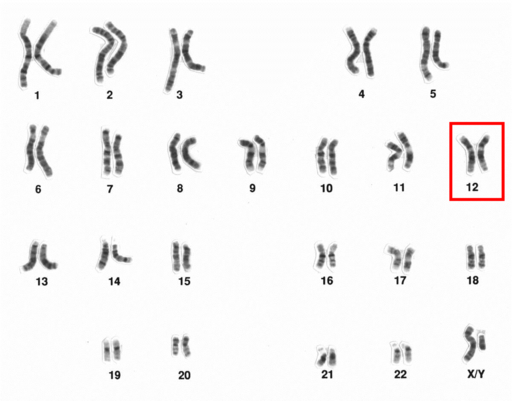 This study discovered that this specific haplotype on chromosome 12 contains three helpful genes: OAS1, OAS2, and OAS3. These genes encode for a specific enzyme called oligoadenylate synthetase. As we learned in AP Biology, enzymes are created by free ribosomes in the cytosol; the ribosomes manufacture proteins(a chain of amino acids), such as enzymes for cellular reactions. The oligoadenylate chain triggers ribonuclease L. The ribonuclease L, also known as RNase L, is only activated when a viral infection enters the body; it breaks down the viral RNA molecules, leading to autophagy. This enzyme breaks down the viral Sars-Cov-2 RNA and slows/stops the spread of the virus in the body.

Many people have been trying to find ways to move forward from this pandemic and return to our previous form of normal life. Scientists may be able to use this information about this specific haplotype on chromosome 12 with gene editing technologies, such as CRISPR, to help individuals slow and later stop the spread of COVID-19. Research like this may be one way to be able to return to a normal life-style and keep people out of hospitals from COVID-19. As we continue on in AP Biology this year, I look forward to learning about the idea of genes and gene editing as I will have more knowledge to touch back on this research study. Do you think that this is a possible solution to the COVID-19 pandemic?