How Fruit Flies Changed Humans’ Understanding of ADHD and Autism

Think about driving on the highway. There may be music blaring on the radio, a friend chatting away in the passengers’ seat, birds flying over head, and hundreds of shiny multicolored cars whizzing by. Still, you focus on the road ahead of you and all the levers you must pull and pedals you must press to complete your drive. Your brain’s ability to focus solely on the task at hand is what scientists refer to as the phenomenon of habituation. Habituation is a when an organism is introduced to stimulus like a sight or sound so many times that the brain can begin to filter it out and no longer respond to it as strongly or at all. This concept of habituation has been known to scientists for years, but poorly understood until now. A study conducted and published recently in the journal, PLOS Genetics, by scientists at the CSIR-Centre for Cellular and Molecular Biology in Hyderabad, India, may finally explain this phenomenon.

Led by scientist and scholar Runa Hamid, the team utilized fruit flies to study how these tiny organisms could learn to tune out specific scents and only focus on the ones they wanted and needed. Fruit flies, also known by their scientific name of Drosophila, are commonly used in scientific experiments as their DNA is shockingly similar to that of humans. For their tests, the team exposed wildtype larvae to certain chemical odors like Ethyl acetate. At first exposure, the flies flocked to this odor. After just 5 minutes, the flies began to avoid this odor and search for other sources of food! However, some flies took longer to become habituated than the rest and some became hypersensitive instead, seemingly being more fixated on the odor the more that they were exposed to it. 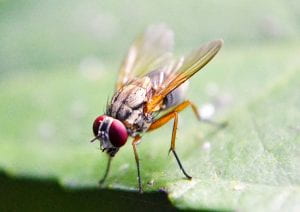 Can you believe we share high levels of DNA with these guys?

The researchers then tested the brain activity of the flies. They found that flies that took longer to tune out the scents and/or became even more sensitive to them had fewer choline transporters in their brains. Produced in the liver, choline is an essential nutrient which helps compose Acetylcholine, a neurotransmitter which binds as a ligand to the receptor protein to Acetylcholine receptor pathways. As we learned in AP Bio, neurons in the brain release neurotransmitters to diffuse across a “synapse”, the small gap between the signaling cell and the target cell. In this specific case, the Acetylcholine binds to the receptor protein site embedded in the membrane of brain cells and opens the ligand-gated ion channel. However, to make these neurotransmitters, the neurons need transport proteins to bring nutrients like choline into the cell. Without choline, neurons cannot produce Acetylcholine and the cell signaling pathways which Acetylcholine stimulates will not be signaled, or yield a response.

In short, flies with a sufficient amount of choline receptors in the brain produced the neurotransmitters needed to signal the Acetylcholine receptor pathway; These flies were able to quickly adapt to the stimulus provided. The flies that struggled to focus and tune out the scent were proven to have fewer choline receptors, meaning their brains did not produce adequate amounts of Acetylcholine. This helped the scientists conclude that Acetylcholine, specifically the molecules that allow for its thorough production, are necessary components of the phenomenon of habituation.

As the behaviors of poor focus and/or hypersensitivity to stimuli are traits of ADHD and Autism Spectrum Disorders in humans, the scientists believe there is a link between the biochemistry of the fruit flies and humans with these disorders; They concluded that reduced choline transport proteins in the brain of humans are a likely cause of the attention related symptoms of ADHD and Autism. Although further studies will need to be conducted, the high levels of shared DNA in humans and fruits flies mean that our biochemistry is likely wired in similar mechanisms to that of the flies. Thanks to the work of these scientists to understand one poorly understood biological phenomenon, they have opened the door into further research and understanding of another.