Mix some water and cornstarch. We’ve all made it in science class: Oobleck! It’s that weird solid-ish liquidy substance that feels like wet putty in your hands. And it has more in common with a frog’s saliva than you think (partially because it’s a little odd if you’re constantly thinking about frog saliva, but you should be because it’s really cool!!!).

A Ph.D. student Alexis C. Noel and her supervisor David L. Hu at Georgia Tech studied and published their findings in Royal Society Interface. on how, by the laws of physics, a frog’s tongue catches its prey.

The duo was engaged in some hardcore, in-depth, scholarly research scavanging Youtube for the most ground breaking viral videos of the century when they had a spark of inspiration coming from an unlikely source: a video of a frog destroying all our high scores at a game of Ant Smasher with its long tongue (see this is why all homework should be to watch Youtube videos). 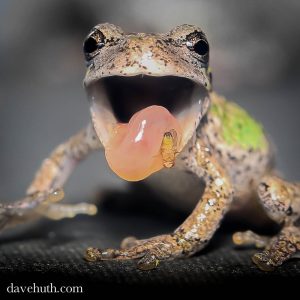 These two individuals became curious just how a frog’s quick and sticky tongue physically was able to catch its prey. They first had to find a high-speed camera, which they used at the Atlanta Botanical Garden and Zoo Atlanta, to record frog tongues in motion since the whole event takes place in the blink of an eye. They also tested saliva and tongue tissue samples and with data on the speed of the tongue and the viscosity of frogs’ saliva, developed a computer simulation to test their hypotheses.

Their results were as follows: frog saliva just like oobleck is a non-Newtonian Fluid!

Frog saliva, which is usually 50,000 times stickier than that of humans, initially behaves less like a liquid. However, the force of the impact between the frog’s tongue and its prey is so great it causes the saliva to liquify more. Thus, the saliva gets into every crevice and covers the insect. When the saliva re-solidifies, the frog has a strong grip on the insect so it can reel it back in.

Of course, there is just one more issue. The frog now needs to release the insect from its tongue so that it can swallow it. To do so, it violently sucks in its eyes, creating a huge force that once again liquifies the saliva, releasing the insect.

So, there you go! That’s the secret to a frog’s saliva. But after reading this you might be thinking: that’s such a random thing to research! Well, the researchers note that this mechanism could be replicated in the development of robots made out of soft materials, a large technology field developing. They believe that this technology could help the robots made out of light and more flexible materials better grip items.

What other technologies do you think this research could aid?