A force to be reckoned with, Rosalind Franklin is described as brilliant and stubborn but also referred to as the “Dark Lady of DNA”. Franklin’s foundation began in Cambridge University where she studied both chemistry and physics. Following that Franklin began working at the British Coal Utilization Research Association where her work became centralized around the prosperity of coal which became her Ph.D. thesis. In 1946, Franklin was finally able to move to Paris to perfect a practice known as x-ray crystallography which later became her life’s work. Franklin started work with a man known as Maurice Wilkins on finding the structure of DNA. 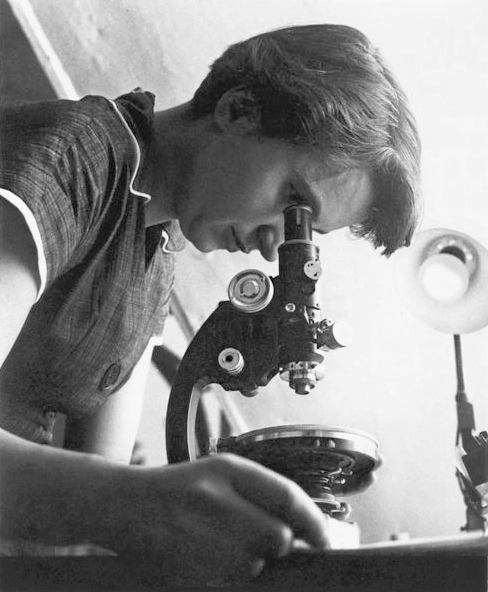 Unfortunately, their clashing personalities took a toll on their professional relationship. This conflict led to the two of them working in relative isolation. While working in isolation suited Franklin, Wilkins went searching for new partners and ended up working at a laboratory in Cambridge with his friend Francis Crick who was working with James Watson on building the model of DNA. Unbeknownst to Franklin, Watson and Crick viewed her unpublished work including “photo 51” shown to Watson by Wilkins. This x-ray diffraction picture of a DNA molecule served as Watson’s inspiration.

Combining Franklin’s photograph with their own data is what allowed Watson and Crick to make their famous model of DNA. Franklin was left with no credit, and it was not until her death that Crick confessed that her work had been critical to the discovery. On a more positive note, Franklin spent her last years in her science prime. She moved to Birkbeck College where she started working on the tobacco mosaic virus. During these years she completed some of the best, most important work of her life and ended up traveling the world to discuss her work and the structure of viruses. Heartbreakingly, just as she reached the peak in her career, she died of ovarian cancer at age 37, accomplishing more in her short life than many renowned male scientists.

Franklin was left to face countless challenges and discouragements in her lifetime . When working at a lab at King’s College in London, Franklin was expected to work with antiquated equipment in the basement of the building. Being the boss she is, Franklin took charge of her lab with her customary efficiency and directed a graduate student in marked the refinements that the x-ray equipment needed. As if this was not trouble enough, Franklin was expected to stop her work every day and leave the building to get lunch. Because she was a girl, Franklin could not eat in the College cafeteria.

With all of these odds working against her, Franklin was able to make progress in studying DNA. However, her real obstacle was Maurice Wilkins. Wilkins was outraged and learned that his female “assistant” whom he expected to be working for him was actually a formidable scientist. This tension causes the two scientist to work independently. When Franklin died in 1898 of ovarian cancer, likely caused by her constant exposure to radiation, she was no longer eligible for the Nobel peace prize.

The Nobel prize can only be shared amongst three living scientists and when it was won by Watson, Crick and Wilson in 1962, Franklins work was barely mentioned. When “The Double Helix” was written in 1968, Franklin was made out to be a villain and Watson describes her as a “belligerent, emotional woman unable to interpret her own data.”

Franklin’s research and presence has only been acknowledged in the past decade. Now, there “are many new facilities, scholarships and research grants especially those for women, being named in her honor.” Franklin was a role model. Her father wanted to be a scientist but World War One cut short his education. Franklin always wanted to be a scientist. She faced it all. Her own father discouraged her because he thought it was unfit that a girl should be in such a field.

Franklin took one of the first steps so that so many women could pursue their dreams in science. I have always wanted to be a scientist and have even faced challenges myself because I am a female. Rosalind Franklin is a role model for me and if I can turn out to be a fraction of the scientist she was, I will be happy.