Looking at your dog can bring a smile to your face, and looking at you can actually make your dog smile too!  A new study shows that dogs have an emotional response to our facial expressions; dogs like smiling faces, and don’t like angry faces. This is linked to the hormone oxytocin, which influences what and how a dog emotionally experiences what it sees. Oxytocin is a neurotransmitter, dubbed the “love hormone,” so an increase in oxytocin yields a positive reaction.

University of Helsinki researchers studied 43 domestic dogs. The dogs were presented with pictures of unfamiliar faces with happy or angry expressions. Each dog was tested twice; once under the influence of oxytocin, and once without oxytocin. The dogs reactions were determined by their gaze and pupil size, because emotions and attentiveness regulate these reactions (for more information on the relationship between pupil size and emotions, click here). According to the authors, “dogs typically focus on the most remarkable aspect of each situation, such as threatening stimuli in a frightening situation.” Therefore in the trial, dogs will focus on the most remarkable face, either the happy or angry one.

The dogs under the influence of oxytocin were more interested in the smiling faces, and the oxytocin influenced their emotional state, as indicated by their pupil size. They had a larger emotional response to smiling faces under oxytocin, because their pupils were wider. When the dogs weren’t under the influence of oxytocin, their pupils were wider when looking at angry faces, so they were more focused on and had a larger emotional response to the angry faces. The researchers concluded that oxytocin made the angry faces seem less threatening, and the happy faces seem more appealing. This is why the dogs focused on happy faces with oxytocin, and angry faces without oxytocin. 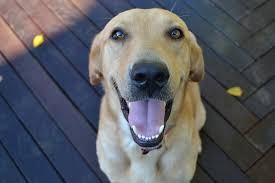 This photo is credited to Max Pixel.

To further the studies, the scientists said that more studies are needed to determine wether the results are only for domestic dogs or if the same reaction occurs with other animals. More studies should also be conducted on dogs with familiar faces, to see if familiarity would change the results of oxytocin on emotional face processing. They also added that in future studies, account of the dog breed, sex, and personality traits should be taken into account because oxytocin does not have uniform effects.