This article focuses on graphene as a use of mosquito repellent. After a research study at Brown University, scientists discovered that the graphene material makes humans invisible to mosquitoes. The researchers conducted an experiment with Aedes aegypti female mosquitos and displayed human skin in a closed area for a couple of minutes at a time. The dry graphene oxide covered skin proved to be a reliable repellent to stop mosquito bites. The research conducted by the scientists at Brown University showed that on a dry surface the graphene oxide covered skin did not receive any mosquito bites. However, the graphene-oxide material’s reliance decreased when water was added to the skin.

Furthermore, the scientists were not very surprised by these results. This is perhaps due to the already vast amount of research done with a graphene based material. As the article states, “These materials have already been used in water filtration, for encapsulation, and to lace plastics and metals as a means to enhance overall mechanical strength. “

Overall, the graphene-oxide material is a reliable repellent for mosquito bites. I chose this topic because as a person who travels a lot, I often have to purchase mosquito repellent sprays to protect myself. I was interested in learning more about a possible material that could be used to prevent such bites from occurring. After reading this article, I believe the research that Brown University conducted provided a good grasp on graphene based repellent. 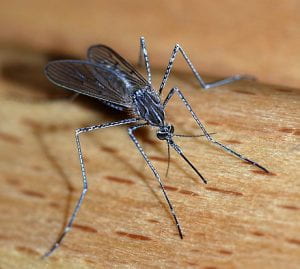 This photo shows a mosquito on wooden surface.

Spice: a mustard plant’s version of Off!

Have you seen me recently?

According to a recent study, the spicy flavor in mustard may be a evolutionary technique of certain wild mustard plants to repel pests.

Scientists investigated two genotypes from the same mustard plant species (Boechera stricta) in the Rocky Mountain, one from Montana and one from Colorado. The two types of mustard plant had unique spices due to “regionally distinct chemical compositions” (Daisy Yuhas, Scientific American). The mustard plants were specifically selected because their habitats had not changed much over thousands of years, allowing researchers to consider both genetic variation and existing environmental factors.

The researchers were able to pinpoint the chemical compounds that caused the differing spicy taste of the two plants. The gene BCMA encodes for an enzyme’s activity. Variations in the gene would produce either the spice of the Montana mustard or the Colorado mustard.

The scientists then planted the two mustard genotypes  in both locations, observing the plant death rate and the way local insect populations reacted. The results?

In the Montana site, the local plants repelled insects and thrived as usual in their natural environment. However, the plants imported from Colorado were not so lucky; they were attacked by insects and had a hard time surviving. These results suggest that the Montana mustard plants possess a spice tailored to deterring pests. It is likely that a mutation in the BCMA gene, and consequently the distinct spice, was so successful in survival for a certain group of plants, that through natural selection the mutation became common in the Montana mustard plant population.

On the other hand, in Colorado, insects ate both the local plants and the imported Montana plants. Possible reasons for this indiscriminate behavior of the insects include a higher spice tolerance among Colorado insects and a more competitive environment in Colorado due to a larger population of insects struggling to find food.

Conducting an additional field experiment, the scientists engineered a close relative of the Boechera stricta species, the Arabidopsis, to express the BCMA genes of the Colorado and Montana mustard plants.  They found that while the spicy compounds deterred some pests, bacteria, and viruses, they increased “susceptibility to others” (Yuhas).

The research of these scientists has provided evidence of natural selection influencing a species’ variation over time.

Now there is something to think about the next time you stare down at your mustard-covered hot dog!