Who is the “New Kid on the Block?”

CRISPR/ Cas 9 is newest technology, that is exciting many scientists. CRISPR stands for clustered, regularly interspaced, short, palindromic repeats. This system is a a bacterial defense mechanism thats is RNA based. Its goal is to eliminate and identify DNA which is foreign that would normally invade the bacteriophages and the plasmids. The Cas endonuclease has the role of cleaving at specific locations of the DNA, by being guided by RNA. Now that we have a general idea what this system is lets find out how it can be beneficial!

We understand that CRISPR, at the DNA cleavage site, has the ability to introduce mutations or genetically engineered DNA.

Here are some examples of how CRISPR can be used in the future:

As the list above only refers to some of the many possibilities CRISPR can have, we can see that this new technology can help humans is many ways. It is evident why CRISPR is referred to as “the new kid on the block.” Hopefully this new system will be able to accomplish the things listed above and many more!

Here are some other interesting sites about CRISPR to learn more!

Can your Medications Hurt you More Than Help?

This is an image of the GI tract. This is the location of where the illness affects the body.

Patrick Schloss, a scientist studying the affects of antibiotics, constructed an experiment that tested the susceptibility of mice to Clostridium difficile (C. diff), which is a bacteria that affects humans and animals. Symptoms include diarrhea and severe inflation of the colon. It is known as an in imbalance of the beneficial bacteria in the gut and is very hard to treat. Fecal transplants can be used to treat Clostridium difficile but he thinks that there may be an easier way. This illness is not caused by any one microbe, but it occurs when lots of bacteria are removed from the GI tract usually due to some form of antibiotic, that is taken to treat another issue that the person is having. Wouldn’t it be be easier if there was a way to prevent this illness in the first place? We all get a common cold, most of us are on the road to recovery once our physician  prescribes us an antibiotic to knock out out our infection. We just need to make sure that it doesn’t take out our good bacteria as well.

In Schloss’s experiment, he first gave mice antibiotics and measured the type and amount of bacteria in the GI tracts. They then added a pathogen to the experiment,  that would almost insure that the mice would get C.diff. When they got the results, they found something that might be very helpful to humans in the medical field.

They found that the mice that had the bacteria of specific groups were much less likely to get C.diff.  Porphyromonadaceae, Lachnospiraceae, Lactobacillus, Alistipes, and Turicibacter are groups of bacteria that seemed to protect the mice from getting the illness. While other bacteria groups increased the likely hood of the mouse getting it, such as Escherichia or Streptococcus bacteria.

This information could be very helpful while treating and even preventing C. diff. If given access to these antibiotics, doctors could diagnose the patient based on whichever bacteria they are lacking. We can prevent C. diff if we can drastically decrease our susceptibility to it, which can be possible in future. And we could also try not prescribe mediations that we know are harmful in terms of causing C. diff. This information could really help many people that need to take antibiotics and also people who already have C. diff.

Some other links to check out: 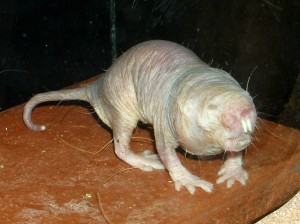 This question is currently being researched because of the mole rats amazing inability to feel pain the way that most animals do. The reason lies in sensory nerves. An ion channel is sensitized when molecules bind themselves to receptors which is TRPV1. Scientists performed a test to see what exactly what makes these animals different than others.

They tested the thermal hyperalgesia of both the common rat and the naked mole rat at TRPV1. What do you think the difference is? From this experiment and by looking at the DNA of other animals as well, they concluded that the switch of 1 to 3 amino acids has a great effect on the naked mole rat. This change causes the receptors to be less sensitive to pain. This unique receptor may be the reason that they are able to survive better than other animals with genetic mutations. Also because they do feel as uncomfortable in the heat compared to others, they are able to live in small tightly packed spaces underground.

This topic is very important because it shows how a small genetic difference can be the basis for a species. It is proven that through evolution, they have a slow metabolic rate and that they do not have anything that is not necessary for their survival, including extra pain receptors. More research is being done on this topic to help us better understand why some animals feel pain and some do not.