The shortage of human organs for transplants is one of the biggest problems facing the medical field, about 22 people die on waitlists for organs die every day in the United States. But there is a newfound hope! A recent discovery using CRISPR-cas9 gene editing may address this challenge.

Scientists have been dreaming about transplanting organs from pigs into people for years, a process called xenotransplantation, but they have been held back by threatening viruses in the pigs DNA called PERVs. PERVs are present throughout the pig genome and would infect a person who receives a pigs heart, lung, kidney, etc. This infection could be fatal and may cause a human epidemic. Scary right? However, scientists at well-known laboratories had a breakthrough this past summer using CRISPR-cas9 and created healthy pigs with no traces of PERV genes!

It was, in fact, the two early developers of that gene-editing technology, Harvard University’s George Church, and Luhan Yang, who first believed CRISPR’s guide RNA and a DNA-slicing enzyme could make precise, genome-wide changes to pig cells. Their results showed that CRISPR could “knock out” PERV genes at all 62 sites in the pig genome. However, there were some flaws in their experiments, they used a line of “immortal” pig kidney cells, which were chosen for their ability to survive in the dish. Earlier the team had tried to use genetically “normal” pig cells, but once the cells were edited they failed to grow normally. Yang says, “CRISPR’s hacking job of the DNA may have prompted them to stop dividing or self-destruct.” But when they exposed the cells to a “chemical cocktail” making them “immortal,” the growth of PERV free cells in the dish rose to 100%.  The next step was to actually produce piglets. The researchers inserted DNA containing the nuclei of the edited cells into the eggs taken from the ovaries of pigs in a slaughterhouse. They allowed each egg to develop into an embryo and implanted it in the uterus of a surrogate mother. Boom, healthy, PERV-free piglets! 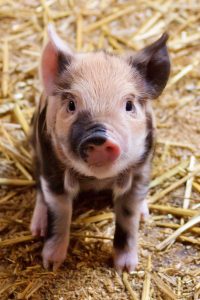 After this huge finding, Church and Yang co-founded a company called eGenesis which focuses on the engineering of transplant organs and projects in laboratories around the world exploded. Currently, a transplant surgeon at the University of Maryland is gearing up to swap a pig heart into the chest of a baboon! However, obstacles still remain in regard to humans; the rejection of the organs once in humans, the physiological incompatibility, how to insert genes that will prevent toxic interactions with human blood, and (what I believe is most important) the ethical question.

A new finding suggests that the protein nup98 found in mouse cells may have another job. This is big in the biology world! Scientists already know this protein helps control the movement of molecules in and out of the nucleus, but they didn’t know it is directly involved in the development of blood cells. After further study, scientists from the Salk Institute found that nup98 enables immature blood stem cells to differentiate into mature cell types. However, this was not even the biggest finding– this differentiation process can contribute to the formation of leukemia!

The journey to make this discovery Salk’s Chief Science Office, Martin Hetzer calls, “combined genomics, proteomics, and cell biology.” It was a complex process at the least. It all started with the Hetzer’s lab focusing on a class of proteins called nucleoproteins (nups), part of the nuclear pore complex, which regulates the space between the nucleus of the cell. Why is this space so important? Because it is where the genetic material is located and the cytoplasm contains multiple important structures! There are about 30 of these proteins and some of them even have functions beyond forming the nuclear pore as transcription factors. Thus, the idea that a protein has more than one function (like nup98) was not a total surprise for the researchers (I still would have been surprised). 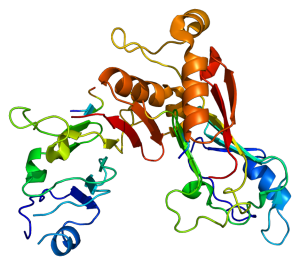 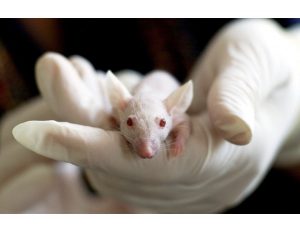 Although we know that nup98 has plays a role in hematopoietic (blood) cells, we do not know how yet. That is a question of the future. However, “The investigators found that it acts through a link with a protein complex called Wdr82-Set1/COMPASS, which is part of the cell’s epigenetic machinery.” Wait what do those numbers and epigenetic machinery mean? It is basically just a process that controls when genes are transcribed and when genes are blocked (hope that helped). The other big question is how this study will parallel in primates and humans, but the future is bright.

The continuation of this study in regard to Leukemia is now left in the hands of leukemia researchers, but cancers driven by a single genetic change like this have been proven easier to treat with drugs than cancer driven my multiple genetic changes. Although this discovery is only the first of many, there is hope for an even bigger finding in the future! I am excited to see what research is to follow. What about you? 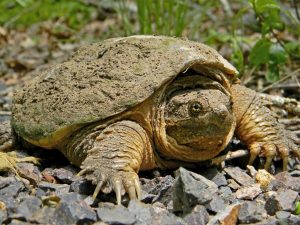 Cancer is a disease characterized by the up-regulation of cell growth and it usually develops when normal cells are not able to repair damaged genetic material. New studies are revealing insights into the function of genetic mutations commonly found in a form of brain cancer, specifically the IDH mutation. Isocitrate Dehydrogenase(IDH) is a metabolic enzyme found in more than 70% of low grade gliomas and secondary glioblastomas, types of malignant brain tumors. In a normal cell, IDH enzymes help to break down nutrients and generate energy cells. When mutated, IDH creates a molecule that alters cells genetic programming and instead of maturing, the cell remain primitive. Studies have shown that cells holding this mutation also have an impaired ability to repair DNA. Strangely enough, low grade gliomas that have the IDH mutation are typically more sensitive to chemotherapy than those that lack the mutation. Why does this occur? We still don’t really know the answer.  Yet, researchers have discovered a potential new treatment option for the glial cells harvesting the IDH mutation– PARP Inhibitors.   A super cool future is waiting ahead.

When treating the IDH mutated cells with PARP Inhibitors, a substance in the form of a drug that blocks an enzyme called PARP, the cells were effectively killed. When the drug blocks PARP, it keeps the cancer cells from repairing their damaged DNA, and eventually they die off. The cells are extremely sensitive after the effects of the inhibitors, especially after taking the most common PARP drug called oliparib. PARP inhibitors are a form of targeted therapy–meaning the inhibitors work within a similar approach as radiation and chemotherapy– they simply damage or prevent the repair the DNA. Researchers have also found the up regulation of the unusual molecule called  2-HG(2-Hydroxyl-glutarate) within the IDH mutated enzymes. In a study with Dr. Brinda’s team at Yale, they found that 2-HG may be responsible for the defect, DNA repair inabilities, in these cells. When the production of 2-HG was blocked in these cells, the DNA repair defect was reversed and cells became unresponsive to the PARP inhibitor treatment. This finding further solidifies that PARP inhibitors may be the best new effective brain cancer treatment method. What do you think? I think this is pretty cool news! 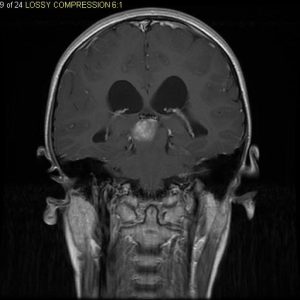 There are also many clinical trials occurring currently to observe 2-HG as a definite IDH biomarker for cells that are sensitive to treatment with PARP inhibitors. In addition, labs are also designing a clinical trial of olaparib and temozolomide, two PARB inhibitor drugs, in patients with low-grade gliomas. The results of these trials, are for sure going to make headlines within the Biology and Medical field! Even though, there are still many questions to answers and studies to conduct regarding brain cancer and the IDH mutation, we are definitely on the right track to cure the monster a.k.a “cancer.”