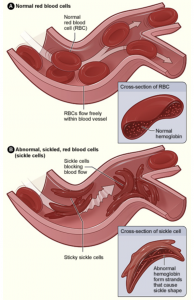 Humans have been trying to solve the question of immortality for hundreds of years. What if the answer to this age old question was right in front of our eyes.

As cells age their proteins become deformed and clump together. They then pass those deformities down to their offspring. Wouldn’t it make sense that this linage, the germline, would eventually become too damaged to produce healthy new life. The resilience of the germline is a phenomena that has puzzled scientists for over 130 years. Humans spend decades aging only to produce offspring that are essentially “brand new”.

Scientists Dr. Bohnert and Cynthia Kenyon turned to studying a tiny worm called Caenorhabditis elegans to determine one way the germline stays young. Right before an egg is fertilized it is swept clean of its deformed proteins. They used Caenorhabditis elegans because they use many of the same genes that humans do for cell division and destruction of faulty cells. Most C. elegans are hermaphrodites, producing both eggs and sperm. They eggs travel down a tube, at the end of which they encounter the sperm. 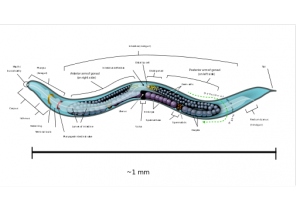 The researchers found that normally the worm’s egg cells carried a surprisingly high number of damaged proteins, but in the eggs near the sperm there was far less damage. They then ran the same experiment with one difference; the women could not produce sperm. The results were that the egg cells throughout the tube were filled with damaged proteins. More experiments were done using a special strain of worms in which clumping proteins glowed. In every experiment the protein clumps disappeared within the eggs once they were near sperm.

Dr. Kenyon and Dr. Bohnert put together a chain of events of how these eggs rejuvenated themselves. It begins with a chemical signal released by the sperm that begins drastic change in the egg. The protein clumps come in contact with lysosomes which have become acidic due to the sperm’s chemical signals. The acidic environment is the perfect pH for enzymes within the lysosome to break down the clumped proteins. This process is done right before fertilization so that their offspring will not inherit the burden of damaged proteins.

It is very likely that the same strategy is used in humans as well as worms. Dr. Kenyon and Dr. Bohnert reported this model has recently been proven on frogs; a much closer relative to humans. This is the way that cells can guarantee a clean slate for their next generation.

What if fertilization wasn’t the only place this happened. What if stem cells use this process to eradicate damaged proteins. This research could have huge implications in treating diseases such as cancer by giving cells a signal to remove all the damage within then. Maybe this could be humanities key to unlock the secret of immortality by signaling cells to repair themselves.

Our DNA has evolved over hundreds of thousands of years. This evolution was usually the result of natural selection. Scientists have discovered another way our genetics have been altered: virus DNA. Our DNA consists of 100,000 pieces of viral DNA and altogether those pieces make up about 8 percent of our DNA. Most of these genes are from endogenous retrovirus. Many viral genes produce proteins that affect our health in unexpected ways. Some of our ancient virus DNA may be protecting us from diseases and others may be raising our risks for cancer. 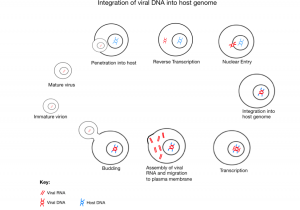 Viral DNA is neither good nor bad. It’s not that simple and the research being done on this part of our genome is just being started. In a recent study scientists engineered healthy cells to make a viral protein that is found in tumors. They concluded that the protein caused the cells to behave in a “cancer like way”. There are other viral proteins that play a crucial role in reproduction, known as syncytins.

This caused scientists to investigate other viral proteins. Five years ago Dr. Heidmann, a French cancer researcher, found a stretch of viral DNA that has gone overlooked and named it Hemo. She also found that versions of this protein was in other species and that the gene behind is have barley changed over thousands of years. The consistency of the gene throughout species shows that the protein must play an important beneficial role. Some preliminary research has shown it to be involved with helping the embryo develop a variety of tissue from stem cells.

Many things are still not known about this part of our DNA and how it affects us but researchers are working hard to find out everything they can. They are actively trying to figure out which viral proteins are beneficial and which are harmful. This research will help us understand a lot about our genome, evolution, and maybe even cancer prevention.